A young single mother dies a violent death. Her two young children witness this horror. With no family members to take them in, they are at the mercy of the courts until an adoptive family is found. Not only is the family willing to adopt both young children, they are also extremely wealthy. And they all live happily ever after…or not.

Things start out well enough for Jamie and his sister Cate when they’re adopted by the Henry family. They fit right in and are soon enrolled in private school, horse-riding lessons, piano lessons, and everything else that being part of a well-off family entails. But as they enter their teenage years, Cate begins to spiral downward in a cycle of drug and alcohol abuse as well as signs of mental illness. Cate’s wild ways catch up with her when she’s sentenced to a juvenile detention facility for burning down a neighborhood horse barn. Jamie’s life without Cate settles into a predictable, safe rhythm. That is, until Cate is released. It starts with threatening phone calls and soon Jamie is seeing Cate everywhere he looks. She’s come back for him, and she’s still crazy. Or is she?

This second novel by Stephanie Kuehn had me flipping pages, or in my case pushing page turn buttons, faster than you can imagine. It’s an intense, on-the-edge of your seat novel that I finished in one day. I kinda thought I had it figured out towards the end but there was still enough suspense at the end to satisfy me. And a big plus for young adult readers is that it’s a fairly safe book with only the hint of sexual tension between teenagers. Grab this one and plan to set everything else aside until you finish it! 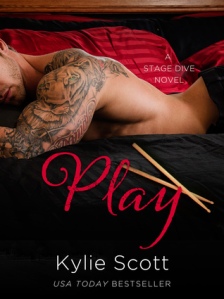 I was super excited when Play released a week early!! I hurried through my current reread so I could start this one. Of course I couldn’t put it down, so that means I stayed up WAY too late. But I had to finish it!! I needed to know what was happening with Mal. While this is book 2, in the Stage Dive series, it can be read as a standalone. I love series like these.

Synopsis
Mal Ericson, drummer for the world famous rock band Stage Dive, needs to clean up his image fast—at least for a little while. Having a good girl on his arm should do the job just fine. Mal doesn’t plan on this temporary fix becoming permanent, but he didn’t count on finding the one right girl.

Anne Rollins never thought she’d ever meet the rock god who plastered her teenage bedroom walls—especially not under these circumstances. Anne has money problems. Big ones. But being paid to play the pretend girlfriend to a wild life-of-the-party drummer couldn’t end well. No matter how hot he is. Or could it?

Anne has had a crush on Mal, for years. So when she meets him, she is completely shocked at how he acts around her. He teases and pushes her buttons, but he also makes her want to tear off her clothes and jump him. This is a big problem, when decides to move in with her. When he comes up with the fake girlfriend plan, she is hesitant to go along, but she has no choice. Now if only she could tell her heart to stay out of it, everything would be fine.

But of course, that’s not going to happen, is it?

Mal seemed quite high strung and a bit crazy. I was wondering if there wasn’t an underlying cause. I seriously thought he had mental issues. He was so up and down, I was getting whiplash, just like Anne. But eventually you find out the reason behind his happy-go-lucky routine and it broke my heart. He was so sweet and kind and I never wanted him to have to go through what was happening.

I found myself cracking up half the time. I knew there was some serious issues happening, but Mal was so good at keeping the bad tucked away, you couldn’t help but chuckle at him. And while he was joking around, he very serious about Anne. He would do anything for her. I also loved the bold way he spoke to her. If he wanted her, he had a way saying plainly saying it, and yet making it come out kind of funny.

In the end, I was quite happy and sad. He deserved happiness, but I will miss his antics. Hopefully, in the next book, we’ll see a bit more of his goofiness.