Why did I read this?? In the back of my head I knew I was gonna like it, but I didn’t wanna get sucked into yet another series. But, silly me, I was sick of seeing it staring at me, when I scroll through my kindle, so I decided to give it a shot. Guess what happened???

Indy Savage has loved Lee Nightingale since she was five. But he never looked at her like that. To him, she was a little sister. She has been avoiding him, for the past 10 years, out of embarrassment. But she seems to have gotten herself in a pickle and he decides to help her. She doesn’t want his help, but he seems to take no for an answer.

She finds herself in many Stephanie Plum moments, that had me cracking up. Stun gunned, dead bodies, stolen diamonds, and the occasional kidnapping. She lives her life like she hasn’t a care in the world.

Lee was the perfect Ranger/Morelli. He owns Nightingale Investigations and is trying to keep Indy in one piece long enough to show her how he feels about her.

It was super fun to read. The banter was hilarious.

“Your grandmother used to say that you two were two souls separated at birth. She mainly meant that you were both trouble and deserved each other.”

The romance was sweet.

“I intend to marry you and spend the rest of my life with you. If that freaks you out, tough, because now that we’ve started this, there’s no goin’ back.”

The romance was HOT.

“I could be on assignment, in a desert as hot as an oven, in a jungle as close as fuck, and sometimes I’d get through it dreamin’ of you saying my name like that.”

Since I’ve read her Mystery Man, Unfinished Hero and Chaos series, I just HAD to like this one as well. Now I have a glimpse into a few of the guys we’ve seen in the other series. Looks like I’ll be going on Amazon to grab the other seven books. 🙂

This book is an excellent follow up to A Discovery of Witches. I was afraid that the sequel would not live up to my expectations that have been building for a year since I read the first one. Luckily, that fear was incorrect.

I loved getting glimpses of various historically famous places and people. Like any good book it made me want to go find out more. I have no doubt I will be reading about Christopher Marlowe and Walter Raleigh due to this book.

The relationship between Matthew and Diana also did not disappoint. There was both romance and intrigue along with more secrets that hadn’t been revealed before. There was enough suspense and action to keep my interest and balance out the romance.

I loved this book, just as much as the first one. I own both audio and Kindle versions because the narrator is so amazing. I will be waiting on pins and needles for the third book. Undoubtedly it will go in my favorites shelf as well. I was able to get a hardcover of this signed by the author, so now I own all of the version of this one just about!

But it Now Shadow of Night: A Novel (All Souls Trilogy)

Clio wrote an awesome advance review of this 4 star romance. Now that the book has been released I’m just going to add my two cents. 🙂

British rom-coms are one of my favorite genres. This one made the grade. I chuckled during Sophie and Adam’s wedding weekend, hurt for Sophie when she was getting her feelings trampled all over, and sighed with relief when Sophie and Adam finally started being honest with each other.

Low points included Sophie’s insecurities being too exaggerated, and being reminded repeatedly of Adam’s “player” reputation.

One of my favorite things about this book is how fun the characters were. The guests at the wedding, Adam’s mom, Sophie’s best friend and relatives… they all sounded like people I’d want to meet up with for a drink. Kudos to Teresa Morgan for a cheery cast!

If you like Jill Mansell and romantic comedies, you will enjoy Plus One is a Lucky Number.

Buy It Now Plus One is a Lucky Number: HarperImpulse RomCom

11 year old Melody has Cerebral Palsy and has always been overlooked and under rated – by pretty much everyone except her parents. She has a photographic memory, is incredibly intelligent but she also cannot talk at all. We get to hear Melody’s thoughts on everything from her Doctor telling her mother that she is mentally handicapped and can’t learn anything more to her special education classmates.

Melody is funny and has an incredible outlook on her life.

A person is so much more than the name of a diagnosis on a chart.

From the time I was really little—maybe just a few months old—words were like sweet, liquid gifts, and I drank them like lemonade. I could almost taste them. They made my jumbled thoughts and feelings have substance. My parents have always blanketed me with conversation. They chattered and babbled. They verbalized and vocalized. My father sang to me. My mother whispered her strength into my ear.

Melody gets frustrated with people taking her for granted and no one paying her any attention. But she discovers something that can give her back her power of speech. From there Melody’s life starts to change – both for the bad and the good.

I found this book incredibly touching and unexpectedly funny.  I think that this is a great book for teens and younger to read – it’s entertaining but also teaches a great lesson in how to treat others. But as an adult I also really enjoyed this and would highly recommend to anyone.

Buy it Now Out of My Mind 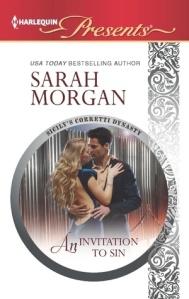 There’s an instant attraction when Taylor Carmichael and Luca Coretti meet at the wedding of his cousin. They end up kissing when they bump into each other later. Unbeknownst to them, photographs were taken of the embrace and sold to the tabloids.

Taylor is trying to overcome her bad girl past and become a respected actress. She has a forbidden list, which include carbs and men like Luca, that she thinks will help her stay out of trouble. When she is confronted with the photos, she blurts out they are engaged.

Luca is also trying to overcome his playboy reputation. He wants to be on the board of his fashion house while his brother is away. (The brother’s story is told in book 1, but you don’t need to read it to understand what’s happening in this book.) He learns quickly that Taylor claims they are secretly engaged. He tries to tell the board the truth but they think that since Luca is ready for such a commitment as marriage, then he is maturing and ready to be a member of the board. Thus begins this delightful tale of a fake engagement. As they spend time together as couple, they get to know each bother while trying to handle the sizzling chemistry between them. Luca helps Taylor to have fun and eat some carbs. Taylor, well, I think that is the one weakness of this book. I really didn’t see what was about Taylor that made Luca fall in love. Yes, they have amazing chemistry and he becomes very protective of her, but still I wonder a little bit.

Overall, I thoroughly enjoyed this take on a familiar trope. The engaging couple and great dialogue make this book easy to recommend.

Buy It Now An Invitation to Sin (Harlequin Presents)

Oh, Robyn Carr, I do love your talent. Who else can make an ensemble cast and a main character develop simultaneously in the same novel? Romance leads the way while family life and suspense follow closely behind.

I liked the romantic element in The Hero — Devon runs away with her daughter from a drug dealer-run commune — and ends up falling in love with a new guy in a new town (Thunder Point). He’s her hero in a way.

And I liked the family and community themes EVEN MORE. Rawley, the antisocial, grouchy old coot who helps Cooper at the beach restaurant, finally finds a social niche. Rawley found Devon walking along the road, saved her, and gave her a place to stay — a physical home and a home in his grandfatherly heart. Devon and her daughter Mercy are the family Rawley never had. He is Devon’s hero, too.

The women of the town quickly take to Devon, meeting her for coffee and lending an ear. They make her feel part of the town, without requiring that she repay them. The women’s friendships save Devon emotionally. They are her heroes.

By the end, we see the many ways Devon is a hero – to herself, her love interest, her daughter, Rawley, the doctor’s office. And she finally sees it too.

Around Devon’s story, Robyn Carr masterfully weaves in updates on the rest of the characters, whose stories began in Thunder Point books 1 and 2: Eric and Ashley, Cooper and Sarah and Landon (and Eve), Mac and Gina, Spencer and Austin… their relationships continue to grow and develop in wonderful ways. There are new homes, engagement rings, new jobs, a new school year, and even a beach wedding.

The Hero was a combination of the best romantic elements from The Wanderer (book 1) and the well-developed family elements in The Newcomer (book 2).

Thank you for a great escape, Robyn Carr! I lived in Thunder Point for a night and enjoyed every word, every chapter.

Buy It Now The Hero

This a thorough compilation of short stories, interviews of her characters by Brockmann, and a Q&A of the author from her popular Troubleshooters series. The Troubleshooters series involves Navy Seals, FBI and a civilian black ops organization. Included at the beginning is a timeline which lists when the short stories and interviews take place. It also lists hero & heroine of each book, brief storyline, secondary romance and timeframe. At the end is a glossary of terms. Like I said, thorough.

There is one new short story, “A Seal and Three Babies,” which feature Sam & Alyssa, Max& Gina, and Jules & Robin. The short stories mostly feature Sam, Alyssa & Jules. So if you are fan of the series & of these characters, you are in for a treat. My favorite story of the bunch doesn’t actually include any of them.

I would only recommend this book for fans of the series. I have not read Brockmann in years. While I was reading this book, her engaging voice reminded me why I love the TS series. Chances are, I will read her new book set in the TS world that will be released next year.

This ARC was provided by the publisher via NetGalley.