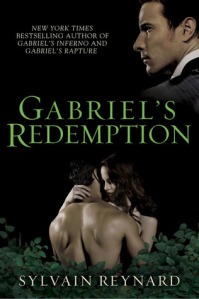 “Of all the gifts God gave me…the greatest one is you.”

Let me start out by saying that I was perfectly happy with the way Gabriel’s Rapture ended. If there wasn’t a third book, I would be content. Even Sylvain Reynard was content with the ending of Rapture. That being said, I’m even happier he changed his mind and gave us a bit of closure and a bit of their futures.

Professor Gabriel Emerson left his job to follow his wife, Julianne, to Harvard for her graduate program. He is happy, just to be with her. But when he brings up having children, Julianne’s world crashes around her. She wants to make him happy, but also feels selfish for wanting to finish school first. She knows that for him to want children, is a big step. But she seems a bit childish in this situation. I know having children is scary, but knowing that Gabriel would need a vasectomy reversal soon, since it’s been 10 years, I can’t understand why she would want to wait. She made me a bit irritated.

While Gabriel has a need for a family, he realizes he knows nothing of his own family history, except what he dreams about. And even then, he’s not really sure if it’s real or not. So in order to make his dreams come true, he needs to do a bit of digging into his past. And his past is nothing he wants to be near, too many ghosts.

He also has a hard time accepting the fact that God has forgiven him for his reckless past and he can move on. He doesn’t feel he is worthy of happiness. Julianne has to show and teach him that he is worthy of everything. And no matter what struggles they go through, they will always be together.

“For you, my love, I would endeavor to pluck the stars from the sky, only to shower them at your feet.”

The love between Gabriel and Julianne is so great, I’m surprised my kindle didn’t start smoking. Some of the scenes were downright HOT! I feel even harder for the professor. He knew how to show love and he showed it a lot. 😉 I loved the little snarky narrator, that added to the scenes. For instance, Desk sex can be very, very good, but it’s important to remove the staplers first. 🙂

We also get a glimpse of Julianne’s friend, Paul, and his quest to move on from Julianne. My heart kinda broke for him. He loved Julianne and every time he saw her or though about her, a little piece of his heart broke off.

We also run into and old enemy who decides to continue with the trouble she caused before. I so wanted to beat her! She was making me so mad. I kept hoping she’d get put in her place.

I absolutely adored both of their families. Their struggles to keep moving forward with their lives, was heart breaking. The loneliness of some were eased, while others still struggle. But the love they all share, will get them through anything.

It’s bittersweet to read this book. But all good things come to an end, right? But these will always remain of of my favorite series.

Enter the a Rafflecopter giveaway
to win a pair of Christian Louboutins(Gabriel’s favorite) or 1 of 15 signed sets of the trilogy. Me personally, I want the books. I’d fall on my face in those shoes. I’m a chucks kinda girl. 😉