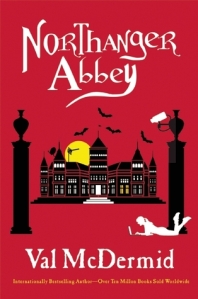 I’m not sure why I do it to myself. I really don’t. What I’m talking about of course, is the scenario in which you read a book hoping against hope that it won’t disappoint you, even when your gut tells you that it will.
Well, this happened to me this week when I decided to start reading Val McDermid’s contemporary retelling of Jane Austen’s Northanger Abbey.
Now, I’m sure most of you know the basic plot of this famous novel; Catherine (or Cat, as she is now called in this version) is sent away to another city in hope of finding a suitable marriage, and the intricacies of this societal bed of hot rocks, serves as the plot of the novel.
In McDermid’s version, Cat goes away to Edinburgh and the story focuses on the people she meets and the antics she gets herself into.
Now, although I wasn’t a fan of the actual book, I have to give McDermid credit for her way of making the story accessible for contemporary readers. McDermid seems to take scene by scene and change it to fit contemporary times, and as a story it does technically work, but does it make a good story? Is it really enough to replace “So and so went to the ball and caused quite a scene when she danced with Captain so and so instead of Captain…” with “so and so went to the club and caused quite a scene when she was recorded twerking with her BFF’s ex” (I made that text up, but it is the same principle). Some will claim that McDermid successfully completed her task, and some will argue that it is just lazy writing. What do I think? Well… somewhere in the middle actually. You’ve been given a task, and I imagine, paid quite handsomely, to contemporize (I know it’s not a word, but it is now) a classic novel. Yes, McDermid did this, and yes, she could have perhaps made it a little more original. All I know is that I’m glad I wasn’t given this task.
If you want to give this novel a go, and you are a die hard Austen fan, I just want to iterate that I am not responsible for any heart attacks, fits of rage, or spontaneous combustion that may occur. (-;