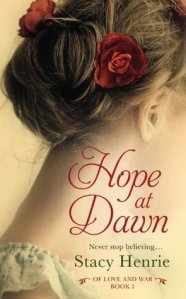 “My love is fully and completely yours.”

Let me just say, I am learning to love these historical romances lately. This book is no exception. I’ll admit, I only wanted to read it because of the cover, It’s just gorgeous. And I assumed it was about a war, from the title, because I never read the blurb…again. This was also another book that is really hard to write about. I want to tell you the entire story, or just type out, “Read it.” But alas, I must do my best.

This book takes place toward the end of WWII and shows what the German-Americans had to deal with. The prejudices and silly laws were only a small part of what really went on in this story. But some of these things I never heard about. For instance, I learned that there was a law that you couldn’t speak German in public. Seriously?!?! These poor people couldn’t even talk to each other, in a language that was easier for them. Unreal.

But let me get back to the story…Livy left college early to come home and help on her family’s farm, while her older brothers went off to fight in the war. But needing to help out more, she found a job as a teacher, far from home, but was willing to move anywhere if it meant helping her parents. What she never expected was teaching German-American children and trying to stay neutral, during these very difficult times.

Friedrick, was home on a deferment, since his father was dying. So he was in charge of his house. He would do anything to prove his loyalty to his country, America. But some in the towns want them out. And they will do anything to make them leave. For instance, buy war bonds, or face jail time.

Friedrick starting help out at the school and found himself smitten with Livy. But knowing that they can’t ever be together, he tries to stay away. He keeps his friendship secret, so she can’t get into trouble, like the last teacher. But unfortunately, trouble seems to find them anyways.

“Standing for the truth will always come at a price, Friedrick, whether it is being bold and sure or silent and strong. Neither one is easy.”

This was a roller coaster of emotions. One moment, I was feeling so happy that they were possibly going to together, then the next minute something horrible happens. I was on the verge of my seat, half the time. I was just fascinated with all the historical information throughout this book. But mostly, I loved the sweetness and slow buildup of their relationship. I would call this a christian historical romance. There was a lot of praying and Bible reading, which I found refreshing. And there was definitely enough heartache to keep my tears flowing also. A complete ride.

What these two people had to endure, in the name of true patriotism and true love, was was just wild. But they would do it over and over, if it meant they could be together.

Knowing that this book is #1 in a series, makes me so very happy. I can’t wait to read the next book, Hope Rising, in December.

I received this ARC, for an honest review.

Buy Hope at Dawn (Of Love and War)

B&N has Hope at Dawn for preorder.

2 thoughts on “Preview: Hope at Dawn, by Stacy Henrie”