I am a puddle on the floor. My pillow is soaked. My side table is filled with tissues. I.AM.WRECKED.

There are books that you’re so afraid of reading, not because they’re bad, but because you know that they’re going to be so good, you’re afraid you won’t be able to adequately find words that will depict how this book made you feel. This is what Ugly Love did to me. I had to pull out my trusty thesaurus and here are a few words. Paralyzed, distressed, ruined, helpless, speechless, awestruck, undone….You get the picture.

Tate Collins has recently moved in with her brother, while she works on her master’s degree, in nursing. She has no time for friends, let alone finding love. But sometimes love doesn’t always listen to us, nor does it go by our timelines.

Miles has a past, that he keeps close to his heart. He is content with being a pilot and hanging with his few buddies. He’s been alone for years and wants nothing to do with women or with finding love. His past has shaped him and he refuses to change.

When Tate and Miles meet, the attraction is almost instant. But neither one of them wants to do the relationship thing, so they just decide to have sex, with no expectations. Since they weren’t even friends, this should be an easy thing to do, right? After all, Miles has only two rules that need to be followed.

“Don’t ask about my past. And never expect a future.”

Sounds simple enough. But soon feelings start to get in the way. Hearts get shattered. Tate starts to have feelings but she knows that Miles doesn’t want this. But how can you stop loving someone, if they want you too? Is it even possible?

“If I were capable of loving someone…it would be you.”

Watching Tate put her feelings out there, and having Miles throw them aside, made me mad. He slowly chipped at her. He started to bring her down, without even trying. I wanted to believe he was good. I wanted to see him come to grips with his past. I needed him to. I knew he wasn’t the jerk he came off like. But his actions were proving me wrong.

But when his past is revealed, it broke me. I could never have imagined this. Many tears were shed. I was a mess. But Miles made more sense now. His actions were based on a past that was riddled with heartbreak.

“And I realized…just now…the God gives us the ugliness so we don’t take the beautiful things for granted.”

By the end of this book, you will truly know how ugly love can be. But even if it’s ugly, it’s beautiful.

Colleen Hoover is truly the master of creating heart healing, soul crushing, tear jerking, emotionally draining, redemption earning books. This book was no exception. I have no idea how she does it, but every book has the ability to bring me to my knees. But I gotta say, if Colleen didn’t love Happily Ever Afters, I doubt I would’ve recovered from this book.

Honestly, my simple words still didn’t do this book justice, when all I really wanted to write was: 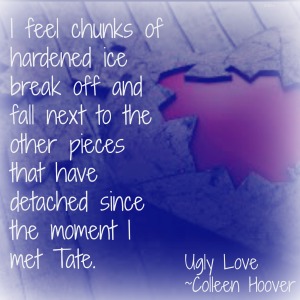 One thought on “Review: Ugly Love, by Colleen Hoover”