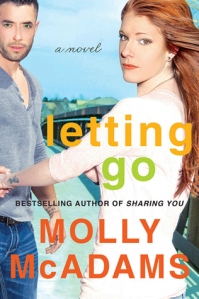 I’ll admit, I was a bit scared to read this latest Molly McAdams book. She has a habit of throwing us for a devastating loop that we never see coming. And this book had plenty loops. But she has a way of healing us as well, after all the destruction. So this left me quite fulfilled.

Synopsis
Grey and Ben fell in love at thirteen and believed they’d be together forever. But three days before their wedding, the twenty-year-old groom-to-be suddenly died from an unknown heart condition, destroying his would-be-bride’s world. If it hadn’t been for their best friend, Jagger, Grey never would have made it through those last two years to graduation. He’s the only one who understands her pain, the only one who knows what it’s like to force yourself to keep moving when your dreams are shattered. Jagger swears he’ll always be there for her, but no one has ever been able to hold on to him. He’s not the kind of guy to settle down.

It’s true that no one has ever been able to keep Jagger—because he’s only ever belonged to Grey. While everyone else worries over Grey’s fragility, he’s the only one who sees her strength. Yet as much as he wants Grey, he knows her heart will always be with Ben. Still they can’t deny the heat that is growing between them—a passion that soon becomes too hot to handle. But admitting their feelings for each other means they’ve got to face the past. Is being together what Ben would have wanted . . . or a betrayal of his memory that will eventually destroy them both?

Right off the bat you see some destruction. The prologue had my heart racing and breaking. But I just knew that if I held on tight, Molly would take care of my heart and in the end I would be okay.

When your life changes in the blink of an eye, and all the plans you made are thrown out, you will need time to move on. This story is about that. It’s about learning to let go and keep moving. It’s about forgiving others, even when their mistakes have made your life totally upside down.

Grey has suffered for two years trying to move on. She couldn’t have done it without Jagger. He’s been her constant companion since she was a little girl. So without his shoulder to lean on and his strong arms to hold her together, she would’ve fell apart.

Jagger has loved Grey for as long as he can remember. But she has always belonged to Ben, so he stayed back and had to watch. But when his best friend dies suddenly and his girl’s life is sent spiraling, he stays by her and helps her, even though all he wants it to tell her that he loves her. But to tell her too soon would set her back, so he remains her friend and hopes that someday they can be closer.

After two years, Grey finds out how Jagger truly feels and is unable to wrap her mind around that. She has always felt something for him, but she feels like she’s cheating on Ben, if she goes for Jagger. Soon she finds herself unable to deny to pull they have toward each other and they find out if they are strong enough to move on from Ben and move on to each other.

He was my best friend. He was my protector and healer. And I was so in love with him.

Their families and friends prove to have just as much drama as they have, and then some. I was quite happy with all the drama that they brought to the table. Definitely had my heart dropping in a few places.

Be sure to enter the 24 hour Rafflecopter giveaway!!!

One thought on “Review: Letting Go, by Molly McAdams”