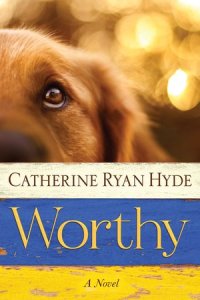 Catherine Ryan Hyde is one of my most reliable authors. Without fail, her stories make you feel. Their characters are so real and appealing that you can’t help but root for them. Her newest book is no exception.

Worthy is his name, but that wasn’t always the case. Once upon a time, not so very long ago, he went by the name of T-Rex. I know, that’s not a very practical name for a dog. But there’s rationale behind it. Anyway, he once belonged to a woman who loved him very much. But there was a man, a not-so-very-nice man who didn’t want to compete with a dog. So he was dropped off, destined to freeze to death.

But a young man found him and saved him. Or did he actually save the young man? It seems as if they both needed each other at the same time. Through this one not-so-extraordinary dog, two people find each other again.

Never fear, this isn’t a love story. Not really, at least. It’s more than that. It’s the story of a tragic ending to what might have been. And it’s the story of friendship and connection many years later. It’s the story of people helping each other get over their fears and their weaknesses. And it’s not really so much about the dog. Worthy just becomes the key that unlocks the past for both the woman and the young man.

This is a story that’s both sweet and sad. Things don’t end perfectly and happily ever after, but life seldom does. It’s a story that will leave you satisfied, and your heart will be a bit fuller.