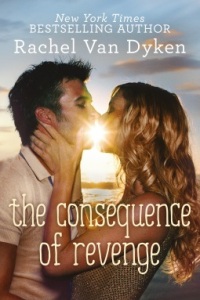 OH MY GOSH!!!!! MAX!!!!! I love Max. I mean, if you read Consequence #1, you met Max. He was the metrosexual best friend of Milo and would do anything for her. Even pretending to be her fiance, so she could get the man she loves. He went above and beyond the call of duty. However, after all he did, he was left alone, without a best friend anymore. And his friends were sick of his moping, so they decided to get him out of his funk.

However their way of helping is not his way. But really, who wouldn’t wanna be on a deserted island with 25 other single women?? Well…..Max. So he’s stuck on an island with the girl who turned him down, a goat, a gecko, and plenty of other women who make his insane personality almost seem normal.

This book was another hilarious installation in the Consequence series. I was cracking up. I loved how the other characters found their way to creep in the story and add to the madness.

I did feel bad for Max being surrounded by all these crazy people. However love manages to sneak in and we get to see the softer and sexier side to him. He was downright swoon worthy.

If you like romance books with plenty of laughter mixed in, and a dash or two of sexiness, then this is your book. Heck, this is your series!!

Be sure to grab The Consequence of Loving Colton

so you can see what happens to Max and understand why his friends did this to him. You won’t be disappointed.

Then grab The Consequence of Revenge