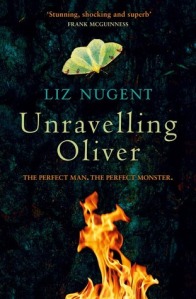 One of the better books I’ve read in quite a while. You’re completely hooked from the first line…

What an opening line! The rest of the book does not disappoint. There really are no lulls in this story. The first chapter is told in Oliver’s voice and of course from the opening line we know what he has done.

So how many times have we wondered how someone could harm another person that they claimed to love? Have you ever heard something shocking about someone you know? Have you felt disbelief? Or are you completely unsurprised by their actions?

The rest of the book alternates between people who have known Oliver…either as child, teenager or an adult. All of their memories and encounters with Oliver paint a very complex portrait.

From the very start with Oliver’s nonchalant and matter-of-fact justifications we are left feeling very cold towards him. His lack of compassion and empathy is downright startling. It allows the reader to instantly hate Oliver and you have no problems at all distancing yourself from him.

As the book progresses and you see Oliver in different stages of his life…well, you can’t help but to be drawn in a bit closer to him….

Are people born bad? Or do events and experiences make them so?

At the end of this story you’re not sure if you hate Oliver completely or if a small part of you feels sorry for him. At some point I knew I can’t change my mind on my feelings….but I am stuck sat here and wondered if just one instance had been different….one turn different, what type of man would Oliver have turned out to be? Or is that really just more of Oliver’s nonchalant and matter-of-fact justifications trying to sway you? Even though he at no point makes any excuses for his behaviour…after all….it is what it is….

This is a disturbing read. But in such a good way. It was original. And best of all….it leaves the reader with shadows of the book haunting them long after the last page ends. Nugent has left me wanting more. I hope she graces us with another book soon. I didn’t really care for the ending…but that doesn’t bother me as much as it does some readers….after all….life doesn’t always turn out as you would like it either…

After thinking about this book a couple of days I have one more thing to add….

I wonder if we’re meant to hate Oliver from the start….If his voice led off the story to make us bias towards him. Nugent has done a brilliant thing here….I mean, though out the rest of the story I found myself looking for the bad in Oliver. I was looking for him to burn a kitten in the woods whilst he was in school. I was looking for some type…any type of cruelty….to justify how I pictured him in my mind. To show me a hint of the man he was as he told his tale.

I am reminded of studies I have heard about….how we label individuals. Even professionals. One example in a study had doctors pose as a mentally ill person. They were admitted to a hospital after they displayed mental health tendencies. After they were admitted, they dropped the act and were their normal selves. Even though they were sane and logical, the workers and the doctors refused to see them as anything other than mentally ill. They ignored the evidence that said this person is not mentally ill….and instead sought to justify the label of mental illness….

My random musings of all this is to just point out…..

Did I hate Oliver and think he is vile based on the label I placed on him from the start? Did I completely overlook the child that he was simply because of the man he became? If we had read the story in chronological order, would we feel different about the entire novel?

See!!!!!!!!!! That’s what type of book this is! It doesn’t leave you in peace…days later you will still be thinking about it and asking yourself questions…..

Review copy provided by Netgalley for an honest review