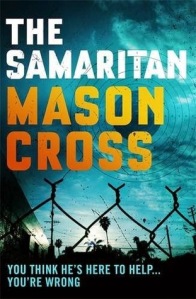 oh dear….I’m not sure what happened here…I LOVED the first book in this series. This one? Meh…not so much….

We still are dealing with Carter Blake….We are still wanting to find out more about Blake and his past….we are allowed once again to see bits and pieces….He’s still in the same line of work….finding people that don’t want to be found….so why didn’t I like this one as much as the first?

A couple of things….First we know Blake was part of some top-secret government black ops that very few people played a part in and even fewer knew about…however, once again, Blake stumbles across someone from this operation. It was too much like the first book.

Another thing…..we are left, yet again, with secondary characters that are playing a major part in the story and yet we aren’t given much insight into them. I hardly think one paragraph explaining the controversy around the main detective qualifies…especially since it her were her POV we saw the most of during the novel…

The way the story jumped around from one POV to another for the first 80% was also distracting….and it might be poor editing that will hopefully be fixed once released, but the flashbacks that the Samaritan had…well….they didn’t flow right….there was no stopping point where the present met the past…it made for a very awkward reading experience..at least a space between paragraphs was needed….

Finally….we didn’t even get much of Blake until the end of the book….just a little bit here and there….Carter Blake is the one who makes this series!!!! Yes he is a mystery….but FFS, he should be playing a major role throughout the entire novel…not just at the end…..and it’s been proven in the past that he is known by the FBI and certain elements just didn’t add up at the end with the bit FBI players involved….

Am I let down by this novel? Yes….it felt choppy and unedited….it wasn’t smooth at all….do I still look forward to the next in the series? Hell yes….Carter Blake is a great character. I still think Mason Cross has a great opportunity to make him a household name. I just hope in the next novel that he expands and doesn’t expect the reader to believe that such a small secret operation has team members that are always running into one another…it’s a very large world out there…I think Cross is safe to look outside this small circle for someone who Blake can hunt….it might even make it more interesting and show his skills if it a complete unknown….

ARC provided by Netgalley for an honest review

Buy it now The Samaritan by Mason Cross