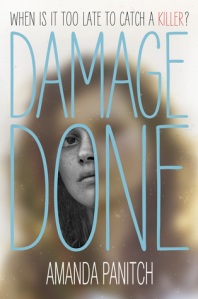 Wow. Can I just leave it at that? Seriously, if I went no further and that compelled you to read this book I think you’d agree completely. But, since that really doesn’t qualify as a review…

Julia and her family have moved to a new town, taken on new identities and histories. They had to after her twin brother committed an unforgivable crime that pushed them to the edges of society. So they’ve started over, and they’ve left the past behind. But it’s not as simple as separating the “before” and the “after”. There isn’t enough time or enough miles to keep the past away.

Julia, or Lucy as she’s now known, finds herself looking over her shoulder. She’s sure that she’s being followed. But what could they want from her? She doesn’t remember what happened during those horrific twenty-two minutes. Or so she says.

This debut novel by Amanda Panitch does not disappoint. It’s full of more twists and turns than you can imagine. Figure it out and then something else happens. From the gripping first pages to the unforgettable conclusion, it’s a book that I’ll be recommending to friends far and wide.