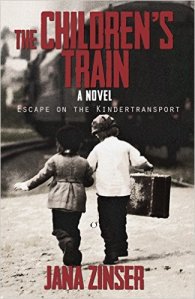 If you asked me what my preferred genre is, I’d be hard pressed to narrow it down to just one. However, historical fiction ranks at the top of that list. I love a book that tells a great story while also teaching me a bit of something new. That’s why some of my favorite books of all time include The Book Thief and The Orphan Train. It’s for that very reason that this book by Jana Kinser caught my eye.

Nazi Germany was a terrifying place for all, but especially for young children. Their safe, secure world was turned upside down as they were targeted for nothing more than being Jewish. Homes and livelihoods were destroyed, families were separated, loved ones lost their lives. All because of something they had no control over. But there was hope for many of the children in the form of selfless volunteers who risked their lives to help these children escape and have a chance at a somewhat normal life.

For the most part, this story centers on young Peter. He and his family have a happy, secure life in their comfy little apartment above their butcher shop. That all comes crashing down when the Nazis invade their small town taking over everything. Suddenly, being Jewish is a crime, punishable by death even. Peter and his family find themselves without a home along with many others. When the chance to escape presents itself, Peter and his younger sister take it. On the Kindertransport they go, off to a better life. Their journey is not without risks, though, as the war rages on.

There are other characters, of course. And their stories are just as important. There’s young Eva, the apple of Peter’s eye. She has a ticket on the train to freedom but her older brother has a different idea. Stephen and Hans are sent on the train to safety by their respective families. And then there are the tragic stories of those left behind, children who didn’t get a seat on the train as well as adults not able to escape.

This was an incredibly engaging story for me because I had no idea such a thing existed. The Kindertransport was something new that I’m now highly motivated to learn more about. For that reason alone, it was a book I just couldn’t put down. The characters and storylines were good as well, although I did feel that many of the deaths were described too matter-of-factly. Still, a great story about an interesting subject!

Buy It Now: The Children’s Train: Escape on the Kindertransport