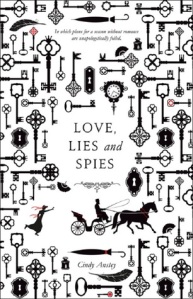 I was completely taken in by the cover. It looked like something I would enjoy and I was right. So cute!!

SYNOPSIS
Juliana Telford is not your average nineteenth-century young lady. She’s much more interested in researching ladybugs than marriage, fashionable dresses, or dances. So when her father sends her to London for a season, she’s determined not to form any attachments. Instead, she plans to secretly publish their research.

Spencer Northam is not the average young gentleman of leisure he appears. He is actually a spy for the War Office, and is more focused on acing his first mission than meeting eligible ladies. Fortunately, Juliana feels the same, and they agree to pretend to fall for each other. Spencer can finally focus, until he is tasked with observing Juliana’s traveling companions . . . and Juliana herself.

From the very first chapter title and sentence, I was hooked. In fact, I read the first page to my kids, while they were eating lunch, and my daughter said she wants to read it. THAT right there is a good sign.

I was totally taken in by Juliana’s quirks. She seemed to get into trouble, without even trying. All she wants to do is stay out of the limelight and avoid any suitors, but the more she tries to be invisible the more she’s noticed, and sometimes not by the best people.

Spencer has a mission to do, and it doesn’t include falling in love. Actually, that’s the farthest thing from his mind. That is until he sets his eyes on a bewitching young lady with a talent for trouble.

There’s something to be said for the friends to lovers stories. Those are the some of the best. The heart wants what the heart wants and even if you, or anyone else, try and stop it, it always wins in the end.

“There are not enough superlatives in the English language to capture even a tenth of my emotions.”

One thought on “Review: Love, Lies & Spies by Cindy Anstey”