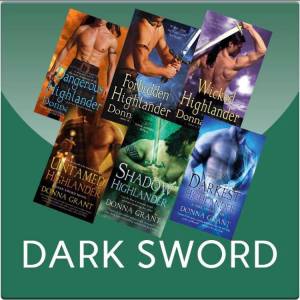 I spent last week binge reading this series. For some crazy reason, I read the two series that followed this, Dark Warriors and Dark Kings, but I never read this one. So weird.

The Dark Sword series is about Scottish warriors who have gods living inside of them. The gods come to the strongest in each clan. The men had no idea they had god inside of them until the evil Deirdre took them captive and unbound them. These book are their stories of how they escaped and how they vowed to seek revenge and destroy her.

Each story is filled with action and adventure and, most of all, love. There is the perfect woman for each man. And of course, then men don’t feel worthy, due to there being a god inside of them. They’re afraid of the god taking over and making them evil, so they try to stay away from the women they want. And plus, Deirdre will do anything to hurt them and bring them back under her mountain. She wants their power and will kill anyone that gets in her way.

Since I read the first series last, I saw so many familiar faces. It makes me want to do a massive reread, but I just don’t have the time. *pretend I’m making a sad face* You’ll feel the same way once you read these also.

If you like a world filled with magic and druids and sexy highlanders, then this is the series for you.