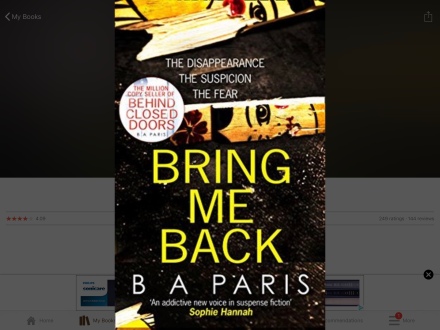 There’s a thread of commonality in most psychological thrillers. Jilted lover, mental illness, murder and mayhem…it almost reads like a recipe. Many of them are still very good, though. However, I’m always excited when I read one that’s so far off that path that it rocks my reading world.

It’s been 12 years since Layla disappeared. Suspected at first of causing her harm, Finn has finally moved on. Quite unexpectedly, he’s found love and happiness with Ellen, Layla’s sister. But just as they are ready to begin planning their wedding, the memory of Layla rears its head. At first they brush it off as coincidence, maybe even someone playing a cruel joke. Eventually, though, there’s no denying that Layla, or someone pretending to be her, is back. The question is, what does she want? And where has she been all this time?

Outstanding. That’s about all I can say about this one. It’s dark and foreboding and you just know something bad is going to happen. And I gotta admit, I’m pretty good at figuring things out before the very end. But even I didn’t see this one coming!

Buy It Now: Bring Me Back