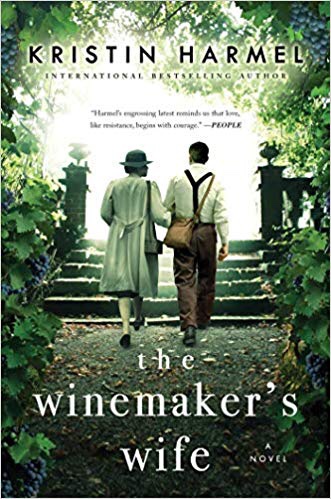 I had a friend recently mention that she was a bit burned out on books with wife/husband/daughter/etc. in the title. Believe me, I understand the overload and fatigue from so much of the same. But trust me, you’ll want to give this one a chance if you’re a fan of WWII era stories.

This one’s a tale of a love triangle. Well actually, a quadrangle. When Inès met and married Michel, she had visions of happily ever after dancing around in her head. But living and working in a winery is not as glamorous as she’d expected. It’s even more difficult when someone else is vying for your husband’s affection.

And then there’s the war. As France is pulled deeper and deeper into German occupation, everyone involved has something to lose. And everyone has secrets. Some are working for the Resistance, and some are aligning themselves with the enemy.

This is one of those stories that alternates between past and present. And really, that’s the best way to tell a tale such as this. An outstanding addition to the genre.

Buy It Now: The Winemaker’s Wife