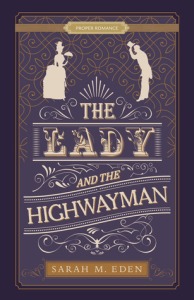 As a headmistress of an all girls school, Elizabeth Black wrote in her spare time. She’s know for her “silver fork” novels. And being a woman, this was acceptable. But what they didn’t know was that she also wrote “penny dreadfuls” under the name of Mr. King. If people knew she wrote those, her school would be ruined and so would she. So she kept it secret and used all the funds to help out her school.

Now the men who normally write those were part of a secret society who used their wages to help those in need. So when Mr. King starts to worm his way into their earnings, they take it upon themselves to discover who it is. They can’t risk not having the funds when they need to plan rescues and such. So their leader, Fletcher Walker asks Elizabeth for help. As a fellow author he hopes that she’ll know things he doesn’t.

I enjoyed watching these two. They both were doing things for the right reasons, but neither one could let their secrets be known. And while working together they grew closer. Amid all the mysteries and suspense, romance was blooming. And it was sweet.

This is another Proper Romance that I adore. I can’t get enough of these. They’re a nice breath of fresh air in the midst of the stress of life.