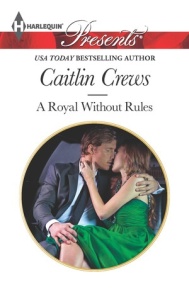 “Prince Pato, international manwhore and noted black sheep of the Kitzinia royal family, was the biggest waste of space alive. He stood for nothing save his own hedonism and selfishness, she wanted to be anywhere in the world but here.Anywhere.”

Poor Adriana has been assigned to watch over Prince Patricio (Pato). Pato’s brother, and heir to the throne of Kitzania, will be getting married in a few weeks. Adriana has to prevent Pato from behaving inappropriately and causing embarrassment to the family.

Adriana comes from scandal herself. Three descendants have been mistresses to the Kitzanian royal family.“It isn’t my dirt but I’m covered in it, head toe, but I’ll be clean. Ever.”
As Adriana and Pato work together, the disdain grows to an attraction. More importantly, there’s trust building between them. Pato shares a secret that explains his hedonistic lifestyle.

Overall, I enjoyed their story. I encourage you to pick this one up. Just because there are many Harlequin titles published each month doesn’t mean the books aren’t worth reading. This is one of those gems that is. Pato and Adriana make a scandalously, delightful couple.

ARC provided by publisher via NetGalley.

Buy It Now A Royal Without Rules (Harlequin Presents)