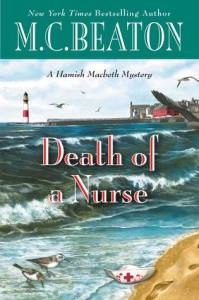 This was an okay read for me. Not a brilliant read, but certainly not a rotten one either. I can easily imagine having rated the book higher if I were more familiar with Hamish and his very quirky acquaintances. I love thriller crime stories, but perhaps murder mysteries of the good old-fashioned Agatha Christie style just aren’t really my cup of tea…However, since I’ve never actually read Agatha Christie I can’t really say that for a fact…

I did read enough to know that I would like to go to the start of the series and see if I can fall in love with Hamish as I see so many other fans have. I do see his appeal, however, coming into his entire weaponry of charm (hahahahaha) unprepared was perhaps my downfalling. I think I needed to gradually introduce myself to him and all of his charms…not just jump in buck naked and unprotected**….

Review copy provided by Netgalley for an honest review

Buy it now Death of a Nurse by MC Beaton

This 31st book in the Hamish Macbeth series begins the way I like a mystery to begin: with a murder. This isn’t just any murder, though. It’s the first of many. Sergeant Macbeth thinks they’re all related, and he’s determined to solve the case.

While Hamish is busy investigating, we watch him navigate his sort of pitiful love life, his friendship with his sidekick Dick, and his relationships with his police superiors.

I liked seeing Hamish’s whole life and how he prioritized work, women, and friends. Beaton succeeds in making him a three-dimensional character that way. I was grateful, because this is the first Hamish Macbeth book I’ve read, and I understood the character in the first few chapters.

Beaton wrote some fun criminals, too. I laughed at their antics and raised my eyebrows quite a few times. The recurring secondary characters were a little flat, though. I didn’t feel like I knew Dick or Jimmy or Blair or any of the other police officers. As a matter of fact, they all got jumbled up for me. I kept going back to earlier chapters to sort them out in my mind. And that doesn’t make for fun reading.

The writing was good for the most part. Sentence structure was perfect, descriptions and word choice were on point. The Scottish bits were terrific! The dialogue was a little weak, though, with some stilted conversation. I also noticed quite a bit of telling-instead-of-showing. Combined, it made the book plod along for me.

And just a little subjectivity: what in the world was the point of Anka? She was sent to the forefront so often that I really thought she would end up with a bigger part than she had. Maybe it’s a tease for books to come?

So in the end, I liked the actual mystery, and I could appreciate the main character, but the rest of the book just didn’t do it for me. But if you’re a mystery buff and a fan of a largely male cast, you might enjoy Death of a Liar. Check it out.

buy DEATH OF A LIAR