A couple of weeks ago, I reviewed The Expats by Chris Pavone, and this week, I have for you a review of Pavone’s follow-up book, The Accident. Now, it’s not strictly a sequel per se, but some of the same characters do appear, and you learn a lot more about them, and I would definitely recommend reading The Expats before you read this one.
Pavone’s The Accident, is set in the cut-throat and sinking world of publishing. We are sucked into the intricacies and complexities that the publishing business faces on a daily basis, all whilst giving us a meaty thriller. Set over the course of a day (except for flashback scenes), Literary agent Isabelle Reed, is anonymously sent a manuscript and even though it is one of many hundreds she will receive in the week, she makes a copy and passes it along to her assistant, and to an editor to read. The manuscript is an explosive expose on the CEO of a multi media empire. It reveals secrets that are damaging to both the CEO and indeed the CIA. It soon becomes clear that anyone who reads the manuscript is soon in grave danger.
As I mentioned in my previous review, Pavone himself is a former editor who has lived in various places throughout Europe. The Accident takes places in Europe and NYC, and because of the author’s previous profession and his expat experience, the story really builds its layers in a successful manner. The pace is taut, the plot exciting – not too far from the realm of believability, and the dialogue is genuine. Pavone has created characters that you really want to either succeed or fail. This is another successful thriller from an author that will soon become as well know and successful as other thriller bigwigs such as David Baldacci. What gives Pavone the edge is his actual experience that he puts in his writing.
This book is definitely worth your time and money if you are a fan of the thriller genre.
~ Pegasus.

ARC provided by Blogging For Books, in exchange for an honest review.

You can read an interview/conversation with Chris Pavone regarding The Accident, here: http://crownpublishing.com/wp-content/uploads/2014/05/A-Conversation-with-Chris-PavoneThe-Accident.pdf 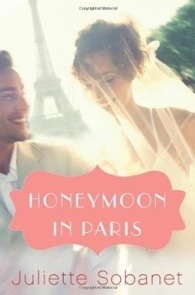 Honeymoon in Paris is a mystery wrapped in chick-lit, with a little romance thrown in. Charlotte and Luc begin their marriage in a small apartment in Lyon, France, where Luc romances the heck out of his wife ….
Until he starts keeping secrets.

For most of the book, Charlotte tries to unravel Luc’s mysterious past, while she herself unwittingly wades into the mystery. I liked Charlotte’s amateur sleuthing. I identified with her need to know what was going on, and also her obliviousness to some of the danger around her. (Call me nosy and naïve!)

I also liked Charlotte’s friendship with Lexi and Fiona. Their knowing glances, quick-catch-ups over pastry or texts, and occasional nights out seemed authentic. The girls are young, adventuresome, and pretty fearless. The book skewed a little young for my personal taste, but it brought me back to my 20s, and it was a pretty fun trip.

The supporting cast was a treat – sleazy Vincent, Devil-Loves-Prada-Glenn-Close Mireille, and spoiled Brigitte. Sometimes foils are just as fun as protagonists, and that was certainly the case here!

The only thing that bothered me about Honeymoon in Paris is the subtitle (A Paris Romance). This book wasn’t much of a romance. It was mostly chick lit and mystery, with a few lovey dovey scenes between the newly married couple. Because of the subtitle, I expected a romance and was disappointed. If the subtitle read A Paris Adventure, I would have been ready for the capers that ensued. The other Paris books in Sobanet’s repertoire skew more toward romance.

If you’re up for suspenseful chick lit and you’ve got your sleuthing hat on, you’ll enjoy Honeymoon in Paris.

Buy it now Honeymoon in Paris