I’ve been thinking for several days about how to review this book.  It’s not that it isn’t good, which it is.  It’s just one of those stories that is hard to describe, hard to recommend to people without giving away too much of the story.

Leon’s life has not been easy.  His mom is an addict, and his dad is in prison.  But still, he’s a good kid. He helps his mom out more than a child should, especially when it comes to taking care of his baby brother.  That’s not enough to keep them out of trouble, though. When his mom finally gives in to her demons, Leon and Jake find themselves taken away and placed into a foster home.

As foster homes go, it’s a good one.  Maureen is kind and caring even at her advanced age.  Leon would probably be happy staying with her indefinitely.  There’s a little hitch in that plan, however.  Baby Jake is adopted, and Leon finds himself missing his brother terribly.  And when Maureen gets sick, things go from bad to worse.  He’s determined to find his brother, and he becomes angry when he can’t.

Set in the late 70s/early 80s, the story mirrors the racial unrest of the time.  As a black child with a white brother, Leon knows that things are different for him.  He just can’t understand why.  It’s a sad story, makes your heart hurt for a child to go through so much. Quick and easy to read, hard to forget.

Buy It Now:  My Name is Leon

A teenage boy is gunned down in the middle of a bad neighborhood. Was he a gang member? Was he armed? Why was the shooter, who happens to be white, released without being charged? These are all questions brought to light in the first several chapters of this thought-provoking book by Kekla Magoon.

The story is told from multiple perspectives. We hear from almost everyone involved. There are the boys Tariq, the victim, grew up with. Most of them have given in to the allure of gang life. There’s Tariq’s family, including his little sister Tina. We have a well-known reverend who has come to town to help shed light on what really happened while at the same time advancing his political career. There’s the shopkeeper who spoke with Tariq right before his death. And there’s the shooter himself. The only person we don’t hear from is Tariq, but he’s dead. Sometimes when a story is told by so many different people it gets convoluted and loses my interest, but not in this case.

So this is the kind of book that’s sure to evoke deep emotion in some people, controversy among others. At first glance, it’s hard to find sympathy for many of the main characters. They are, after all, hardened gang members who deal in drugs and death. But if the reader takes the time to think a little deeper about the story, this is really a commentary on how our society views and treats members of certain racial and economic classes. And although the book certainly does bear some similarity to the fairly recent Trayvon Martin case, incidents like the one described in the book are sadly common enough that the author could have been writing about any one of them. A great read for those willing to go into the story with an open mind.

Buy It Now: How It Went Down 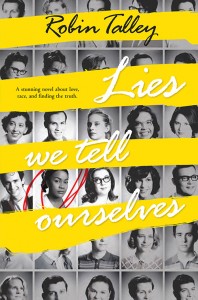 Being a child of the seventies, much of what I know about the Civil Rights Era comes from books that I’ve read. And there’s always an inherent risk that what I’m reading isn’t true to fact or is too preachy. This debut novel by Robin Talley avoids both of those pitfalls.

The year is 1959. The place, Virginia. After a lengthy court battle, public schools in the state have been ordered to integrate. Sarah Dunbar is among a select group of students chosen to attend the previously all-white Jefferson High School. From day one, Sarah and her friends are surrounded by hatred. In addition to being placed in remedial classes and banned from participating in extra curricular activities, they’re faced with a daily deluge of name calling, taunting, things being thrown at them, and outright violence. Still they persevere, conducting themselves with respect and dignity for the most part. When Sarah is forced into a school project with the daughter of a prominent townsperson, things begin to change in ways both good and bad.

This story is told from both perspectives, Sarah’s and Linda’s. We are given a glimpse into Sarah’s feelings about her role as a trailblazer, of course. But what’s more eye-opening to me is hearing Linda’s story. Yes, she’s full of intolerance. But her thoughts made me wonder how that came to be. Was she simply a product of her environment? She’s very unwavering in her belief that segregation is the right thing to do. Then she would have moments that made me think her heart was telling her something different.

I would be remiss if I didn’t mention the turmoil that both Sarah and Linda went through as they struggled with their feelings for each other. They find themselves attracted to each other which during that era was almost as taboo as interracial relationships. For me it wasn’t the main part of the story, and I don’t want it to detract from the author’s insight into the fear and intolerance of that time period. But how can we discuss one without the other? Aren’t we facing much of that same fear and intolerance today? It’s just an additional obstacle young Sarah had to overcome as do many young people in modern times.

This is a tough book to read. There were times I found myself doubting that people could be so cruel. It’s important, however, to remember these shameful parts of our history so that they are not repeated. Avoiding it doesn’t make it go away. And beyond that, my hope is that some day we will look back on society’s current views on homosexuality with the same disbelief we have towards the racial intolerance of our past. Difficult to comprehend but impossible to put down, this is one book you won’t soon forget!

Buy It Now: Lies We Tell Ourselves (Harlequin Teen)