OH MY GOSH!! This book almost didn’t get read. Not that it was bad, but it was very taboo. Hang with me here. Last week I saw this picture on Facebook. It was a sponsored ad. I’ve never heard of this author. Heck, I didn’t even know what the book was about, but I thought the picture was just lovely. I posted it in one of my book clubs and then I found out what it was about. And I gotta be honest, I wasn’t going to read it after that. That was a little too taboo for me. I have certain things I won’t read about, while this wasn’t on my list, it was just something a bit too different for me.

Well, two of my friends decided to give it a shot and they loved it. They know what I like and they both told me to try it. They said it was tastefully done and quite romantic. *sigh* I love romance, and I’m a follower not a leader, so I did what they said. I bought it and read it. And let me tell you, I was sucked in from the very beginning. Here’s the picture I saw. Isn’t it beautiful? There’s something about boots and little shoes that’s just so sweet. 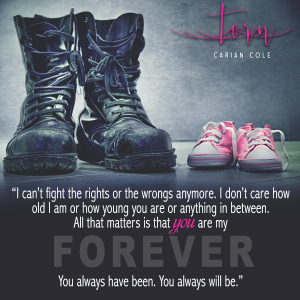 This book was exactly like they said. It was beautiful. It was romantic. And it was written in a way they wasn’t creepy or gross. Even in the synopsis, it even says no underage sex. Once you read the synopsis, you’ll see why THAT was my biggest fear. I like my sexy scenes with people who are old enough to vote, thankyouverymuch.

I fell in love with all of these characters. Family was the main theme and everyone was so different, but in the end, it was all about love. The love of two people who were there for each other, all their lives. It was beautiful. And it was right.

So if you’re in the mood to try something new and different, read Torn.