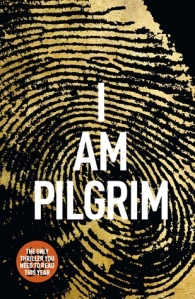 I usually don’t buy into the hype surrounding books, unless they are recommended by good friends, and ‘I am Pilgrim’, is a perfect example. I’ve had it on my Kindle since the beginning of the year almost, and I wanted something quick to read this week, so I decided to give it a go. Well, it certainly lived up to its expectations of a quick and fun read!
The basic premise follows a “retired” CIA black ops agent, who believes that he has left that world behind and is going to settle down in Paris. However, he is called in for one “last mission” to go to Turkey deep undercover in in order to investigate a link with a bioterrorism plot. In order to stay in Turkey undercover, he guises himself as an FBI agent investigating the suspicious death of a rich American. The story follows several points of view throughout, but the two main ones are that of Scot, the CIA agent, and Saracen ,the bioterrorist.
This has already been reviewed by Urania, and I agree with her on the point that sometimes this novel felt disjointed with regards to the plot being a little too neatly tied up in places. There is only so many times you can say “Oh, what a coincidence”. However, I have to give Hayes his dues in regards to his characters. Most of them were fairly well fleshed out compared to your average thriller. I did feel that there was an aspect of Scott’s character that Hayes could have expanded on, but really, that would have taken the book from the thriller genre to the drama genre. The same applies to certain aspects and plot points in the character of Saracen. Maybe a spin off book could be written?
All in all, it was an entertaining read for the end of the Summer. I would be happy to recommend this to anyone. Terry Hayes is definitely an author to keep an eye on.

~ Pegasus
I Am Pilgrim: A Thriller

This was a stellar first novel. Hayes did a superb job. I gave this my highest rating, but after thinking about it for a day or two I have to knock it down just a bit….I will get the messy parts of what I didn’t like out-of-the-way first….

This is a story about a “retired” government agency director…well we all realise that there is no such thing as retirement when it comes to this type of thing….So “The Pilgrim” is born…and must go into Turkey to try to stop a “clean skin”, someone who has no history in any of the databases of the world….The “clean skin” or “The Saracen” has set out to commit biological warfare on American soil and Pilgrim has very little time or information to stop him.

Okay, the problems….The novel felt disjointed at times…as Pilgrim is telling the story, I was not sure if he was talking about the present or current events. He would be investigating a murder in current time and jump back to previous events….but because the entire story was told after the fact, you weren’t sure if his musings were at the present time period, the past or at a near future time. The other thing that flummoxed me was the fact that a murder investigation that started in NYC, totally unrelated to the Saracen’s evil plan to destroy America, is related to a murder in the exact same location that Pilgrim has to go track the Saracen. It was just too convenient and far-fetched. Somehow, Hayes expected us to believe that all of the unrelated events and characters meet up and interact within a small Turkey city….

I haven’t figured out how Hayes could have avoided this…but it lays within my mind that just a few simple changes or additions to the novel could have cleaned all of this up. I blame it all on the author’s previous television experience. Seriously….stop laughing at me! Telly viewers seem able to suspend disbelief and logic for short periods of times. Readers expect the author to have thought out all of the logic and have it laid out just right for their readers. If the author is unable to do so, at the very least his fine editor should be able to correct it…..

Having said this, I still really enjoyed this novel. There are plot twists that seem outrageous after the fact, but they seem perfectly logical as the story is being told. This is a hard book to review, because some of the twists are so outrageous. It will be hard to explain to someone why it’s such a great novel, without them looking at you and saying….”riiiighhhtttt”…..but they are the best parts of the book! They don’t *read* outrageous. I think any reader would be hard pressed to figure out all of the clues and timing. Yet, as I sometimes do, I did not feel cheated or that the writer was pushing too hard. This didn’t read like a modern-day thriller that is a best seller because it was written by a famous author that is relying on his name and not his skill to sell a book….This is a book that should sell and make a bestseller simply because it’s written with a plot that is scary and very real. It’s hard to put down…not because you want to hurry up and finish it….but because you’re gripped in fear and your heart is racing and you have very little choice but to carry on…scared or not, you must not let go….Like a roller coaster ride, you are secretly thrilled by your terror…..This book is real….this type of thing is what any Country needs to be looking out for….not nuclear war heads…but little glass vials….I just hope that there are many “Pilgrims” out there in the real world. There is little doubt that “I Am Pilgrim” is the start of a great new series….Since it is Terry Hayes first book, I have great hopes that the series and the author both grow and mature over time…I look forward to seeing if Pilgrim is able to accept that he is deserving of the things he wants in life. That he, too, is entitled to a little bit of happiness….Terry Hayes has a great opportunity to take a very conflicted hero and grow him into a household name…

Buy it now I Am Pilgrim