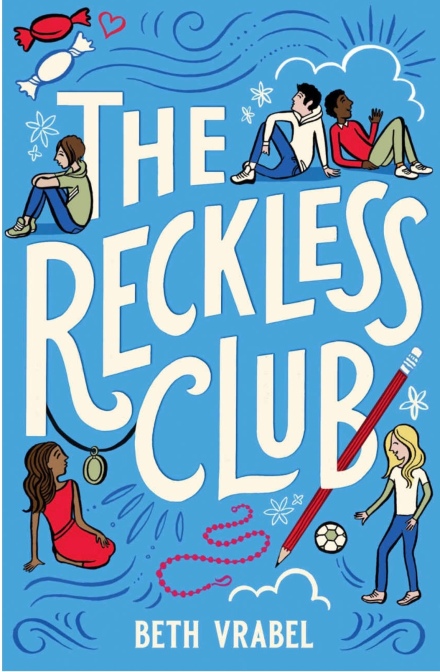 First, apologies for not writing this the first week of October when The Reckless Club was first released. You or your kiddos have waited too long already to read this book. Perfect for middle schoolers, The Reckless Club is a tweenage-appropriate glance at The Breakfast Club, with the extra twists and turns you’d expect from kids this age.

Beth Vrabel did a great job writing varied characters who have personal quirks that showed me a little bit of their souls. And better yet, the kids got a glimpse of each other’s souls, what made them tick, what made them hurt, and what made them better people.

In this world of divisiveness, where people say things on social media that they would never say to someone’s face, we need commentary on the benefits of seeing each other as human beings. The Reckless Club takes that stand, shining a light on the real people underneath what other people see as a drama queen, a nerd, an athlete…

This book reminded me not to judge until I’ve walked a mile in the other person’s shoes. It would make a great Christmas gift for any middle schooler you know, or their teacher.

I guess I’m one of those people who don’t really mind fan-fiction. Hell, I guess I’m just not smart enough to see it in most books. Maybe because I’m not obsessed with many writings. Or maybe I think we all take inspiration from where we can get it, so I don’t really often see fan-fiction as a knockoff. Some people act like it’s a terrible thing and cheating. Other’s can’t get enough of it. I’ve never been bothered either way. If anything I should think it would be an honour. At the end of the day there are very few original concepts out there…and even then the artists still got their inspiration from somewhere!

Starting this book was like an eye opener. Two chapters in and I was like, “oh shite, I’m not sure I will like this.” I mean it was so obviously “The Breakfast Club”. I was like, “really? are you freaking serious?”

But then again, growing up in the 80’s who can’t say that TBC wasn’t just, the be all, end all of everything 80’s. Who doesn’t love that movie?

Then I got over it, and the book progressed. I won’t say I was shocked at the ending. Or surprised. I won’t say I had it all figured out, but I had a pretty good idea of what happened, just not how all the players tied in together.

At the ending, I wasn’t left feeling cheated. I didn’t feel the author took shortcuts or intentionally mislead.

I wasn’t blown away by it, but I did enjoy it once the novel moved on from TBC type feel. I did go back and forth about which character I liked best (this isn’t a bad thing!). I enjoyed them all. I could also relate to them all (just like in TBC). I wanted good things to happen for all of them.

If this is what McManus has to show us in her debut novel, I seriously can’t wait to see what her next one will be like.

Until next time…
Urania xx

ARC provided by Netgalley for an honest review

One of Us Is Lying by Karen M. McManus