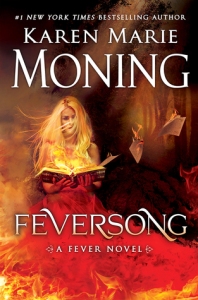 The most critical, defining battles we wage in life, we wage alone.

It has taken me almost a week to collect my thoughts on this book. I’m still reeling. Let me start out by saying that this isn’t the final book in the Fever series, but the final one in the Mac/Barrons story line. So savor it and read it slowly. Trust me.

When we left Feverborn, we left screaming. Mac opened herself up to the Sinsar Dubh and we weren’t sure how, or if, she would be able to get out. In Feversong, Mac must take back control and destroy the book, find the Song of Making to also destroy these black holes that seem to be slowly eating up our world, and do all this without getting lost inside herself again. It is an ongoing battle that only she can do. She must forget about her past actions and focus on the future with a clear head.

In the midst of Mac’s issues we have Dani and her quest to find a balance between Jada and Dani. She is there to help destroy the book, of course, but the five year she spent alone in the silvers has changed her, and not for the better. On the outside Dani is hard and uncaring, but if you chip away her layers, you see that she is soft and just wants love. She will fight to the death for it. Watching her grow into herself was beautiful, devastatingly so. I can’t remember watching a character go through so much and come out stronger for it. I am looking forward to see what happens to her. She has had enough heartache to choke on and I know she deserves a happily ever after.

“I love you more eternal than pi.”

As I said this is the final book about Mac and Barrons. Their story comes full circle and it’s crazy when I look back at when they first met. She was so sad and naive, but by the end she knew who she was and was stronger for it. They had their battles but, through it all, their love was the stuff faerie tales. Truly.

“Fire to his ice.
Frost to my flame.
Forever.”

I spent the final 25% of this book with tears in my eyes. Some scenes had them flowing nonstop, while others had me chocking to hold them in. This book was an epic edition to this series. A full range of emotions. You won’t leave untouched. She makes us work for this ending. Grab a comfy blanket, perhaps a box of tissues and leave the world behind as you escape into the world of the fae. You can thank me later.

Pretend, if you will, that the legendary King Arthur has magically and mysteriously arrived in present-day Los Angeles. Gangs, poverty, despair, crime, children abandoned to the streets…these are all very real current problems in any major city, and Los Angeles has more than its fair share.

The story centers around fourteen-year-old Lance. A classic street child, he’s experienced every form of abuse and neglect at his young age. With the exception of his English teacher, when he does go to school, nobody sees his potential. But isn’t that true of so many of these throwaway kids? When he meets Arthur, his world changes and he becomes part of a mission. A mission to save the kids that nobody seems to care about, even their parents. A mission to clean up parts of the city that have been allowed to fall into neglect thus perpetuating an attitude of crime. A mission to change the way society treats children who, at first glance, don’t appear to have much to offer. Along the way Lance and Arthur recruit a ragtag group of youngsters who truly are representative of today’s youth.

Part Arthurian legend and part urban fantasy, this very ambitious novel by Michael Bowler addresses a very real and shameful problem. Why are so many children, and some very young ones at that, left neglected, abused, and abandoned? And even more importantly, whose responsibility is it to save these children? All too often it’s seen as “not our problem” but Mr. Bowler and I seem to be in agreement on this issue. It truly is society’s responsibility, for the children are the future.

This story resonated with me on so many levels. As a mother, I can’t imagine a parent treating their child in such a harmful manner although I’m completely aware that it happens far too often. As a teacher, it touched me deeply and reinforced my deeply seated belief that we cannot overlook any child, no matter how insignificant their contribution may seem. And as a human being, which we should all be able to relate to, it shames me that so often children are thrown away like this. Not every child is fortunate enough to be born into a loving, caring family. But does that means they’re not deserving of every opportunity to make something of themselves? It takes just one person to make a difference in the life of a child.

Buy it Now: Children of the Knight