Last night was the first night of Atria Indie Author’s fall tour with their 3 best selling authors – Colleen Hoover, Jamie McGuire and Abbi Glines! These authors are really huge in the New Adult/Romance world of books and 2 of us Muses have been pretty much beside ourselves with excitement and not doing a very good job of hiding it very well! Melpomene is a huge fan of Colleen’s and had introduced her books to me, and I promptly fell in love and read every single book she wrote.  We were both ecstatic to see all 3 authors coming to this area.

The big day finally came and it definitely lived up to the hype! Melpomene was so excited that her fabulous husband drove her down early in the day and she basically cased the joint all day. However, she was not alone – there were a few hardcore fans there to keep her company on and off during the day. By the time I met her there she was pretty much telling others in line about our little blog and discussing the awesomeness of the authors. They were in line to get a line number to get books signed.  Our friend, Vi, joined us there and it was pretty great to be amongst our people – other people who loves books as much as we do.

Vi went upstairs to sit down and save 2 seats while we got our 2 line numbers. By the time I went to sit down another huge fan was reporting us to the bookstore for saving seats unlawfully or something. Which was very confusing because this other woman was in the front row and at this point the rest of the rows were pretty empty so I was confused as to why she was so upset, my line number was 16, the friends Melpomene had made were 13 and 14. Vi is a petite woman who was there only to meet us and this other woman kept talking about it very loudly for about 45 minutes so it was kind of hilarious to see her start a mini riot. We owe Vi lots and lots of favors! I would have gladly sat 3 or 4 rows back if this woman would have asked us to! So that was the mini drama of the night.

Then the authors came in – Colleen first, then Abbie Glines and finally Jamie McGuire. 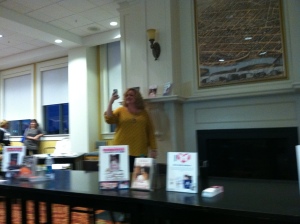 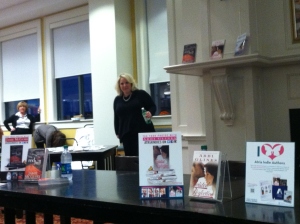 I just have to say that it’s not fair for authors to be this talented AND pretty! Then they had to open their mouths and be funny in person too. Colleen came out taking pictures of the crowd and when the commentator started asking them questions she immediately did not want to answer – as in she preferred one of the others answered first. What struck me the most is how much they seem to get along. I don’t know how it works in other publishing houses but either these three are superb actresses or they really are friends.

Most of the time was spent laughing – the authors were charming and answered the questions about their current releases, their musical inspirations and their advice for aspiring authors. My favorite answer of the night was Colleen’s that she likes Eminem, but that’s just because I do too. All 3 authors signed a ton of books, bags, kindle covers, and pretty much whatever we asked them to. They were super friendly with the fans and took pictures. The place was packed but they didn’t give the impression that they were getting tired at all. 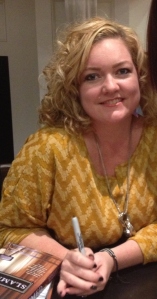 I left a bigger fan because all 3 were great in person! If you can make it to one of their tour dates – GO!! Atria made it a very cool event with some neat swag and it was very organized. Plus you know the AWESOME AUTHORS kind of made it even better. I might still be on a weird kind of high this morning 🙂 I’ve been to multiple signings this year and it’s just so fun to be around people who love to read and people who are interested in what you’re interested in. We made friends sitting there, all of us talking about our favorite books, which authors we loves and getting recommendations for more. Such an excellent experience!!

Oh and you might want to stick around this week and next for some possible giveaways tied into this awesome signing!!