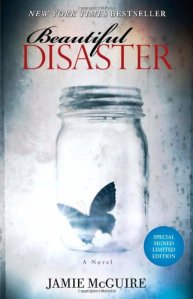 After seeing Jamie McGuire, in October, I was drawn to reread Beautiful Disaster. Can I just say that I LOVE Travis. I truly do. He is, and forever will be, my book boyfriend. I just love him to pieces. He is the epitome of a bad boy. But his heart wants to love. And when he finds his love, she will make him whole.

If you haven’t read BD, then you don’t know the true feeling of angst. I remember reading this, for the first time, right after I got my kindle. I didn’t understand what angst was, at the time. But I was trying to find my perfect book. Well, this was perfect in my eyes. It has everything I love, and need, in a book. After I read this, I remember looking on Goodreads and Amazon for all the books that were similar to this. I’ve read a ton, since then, but none can compare to Beautiful Disaster. They come close, but this one’s on the top.

In case you’ve been living under a rock, and haven’t read it, let me tell you a little bit about it.

Travis Maddox was an underground fighter, and lover of many women, at Eastern University. He gets good grades, but likes to fight for his money. It was at one of his fights that he met Abby Abernathy. She wasn’t impressed by him or his fighting. But he wasn’t letting her go. He would do anything to keep her, even if it meant just being her friend.

He is determined to show that he can be just a friend, if that’s what she wants. But you know how that goes. Boy likes girl, girl likes boy but is determined NOT too. So boy becomes crazy protective and drives girl away.

I loved watching their friendship blossom and their love sneak up her. Abby was so oblivious to everything Travis said or did. She just thought he wanted to be friends. But he wanted so much more. She had no idea how she was slowly destroying him.

“I didn’t know I was lost until you found me.”

Travis made me so mad at parts. I was yelling at him. But then at others, I was totally swooning. He has a way of invoking such crazy feelings that you can’t help but love him, even though he does just stupid things. I loved watching him interact with his brothers and dad. You could see how he loved them, even if growing up wasn’t a walk in the park.

I know some people didn’t like Abby, but I did. She was so clueless, I don’t think she realized how fiercely he wasn’t letting her go. He was gonna get her back if it killed him. He changed his entire behavior for her. He was determined to go down fighting, if need be.

“You can’t tell me what to do any more, Travis! I don’t belong to you!”

In the second it took him to turn and face me, his expression had contorted into anger. He stomped toward me, planting his hands on the bed and leaning into my face.

Words cannot express my true feelings for this book. And when I read Walking Disaster, I was seriously destroyed. Travis is amazing and I don’t think I’ve ever enjoyed the male POV so much, like I did in this one. I highly recommend it. It wasn’t just a recap of BD, it was a whole new story. And of course I sobbed. That’s really not a surprise, I know. But I never expected to sob in the beginning. Whew!!

And since I love love love this book, when I was writing my Top 10 post, I knew which book belonged on top. If you’ve never read this, you really should get on the ball, since the next book, Beautiful Oblivion, comes out in July. I can’t wait!!!