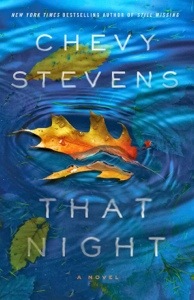 Where to start with this one? Let me begin by saying that all passionate readers have that select group of favorite authors whose newest release is an eagerly anticipated, must-read. Chevy Stevens is one of those authors for me. Anytime she puts out a new story, I just know it’s going to be a good one. This newest selection did not disappoint.

Our protagonist is Toni, a young woman who is being released from prison after a long stint served for the murder of her teenage sister. Everyone, even Toni’s parents, were eventually convinced that she and boyfriend Ryan did indeed murder Nicole. Now seventeen years later, Toni is trying to get her life back on track and find some sense of normalcy, albeit a completely different kind of normal from the one she knew before her incarceration. However, the past has other plans. Enemies and secrets from the past begin to show their ugly heads, threatening to send Toni back to prison. Her only chance to save herself is to find out who is really responsible for her sister’s death.

I enjoyed this story and as a result finished it in a matter of a couple of days. It’s a great honor to read and review this work before it hits the stands. Chevy Stevens has been a favorite author of mine since I discovered Still Missing a few years ago. I will say that this story lacked some of the intensity of her previous stories. It wasn’t as pulse-pounding and page-turning as her earlier works. But, you really can’t go wrong when you pick one of her books off the shelf. You can always rely on a good, compelling story with intriguing characters. Add this one to your list, especially if you’ve enjoyed her other stories!

Buy it Now: That Night