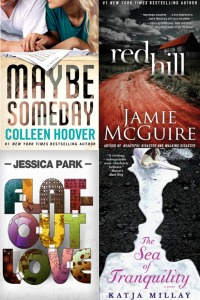 Do you listen to books?? I must admit, up til a year ago, the only audible books I listened to were Hank the Cowdog

, with my kids. I’m dead serious. They’re funny as heck, but when you find yourself listening, in your car, ALONE, it’s time to be a grown up and listen to grown up books.

Around this time last year, I grabbed a ton of the classics, which were free at the time. But have I listened to them?? That would be a big fat NO. However, around this past March, a friend gifted me Maybe Someday

, by Colleen Hoover. Since I already read the book, I wasn’t sure how I was going to like it. But, I stinking loved it!! I fell in love with Zachary Webber, during this book. Seriously. That kid can read me the phone book and I would sit and listen to it.

Since then, I’ve found myself buying more and actually wanting to walk my dog and go grocery shopping alone, just so I can listen to some books. So far this year, I’ve listened to Flat-Out Love

, by Colleen Hoover, and Divergent

, by Veronica Roth. I started The Fault in Our Stars

, but never finished and I’m currently listening to Outlander: A Novel

But by far, the BEST BEST BEST audible I’ve listened to is The Sea of Tranquility

by Katja Millay. I’ve read the book a couple times and it’s in my top 5, but when I listened to it, I lived it. The guy who does the guy’s voice, Kirby Heyborne, did an amazing job!! He had such emotions I seriously thought he was crying. He sounded so believable. If anyone asks what audible they should try, I always tell them this one. Talking about it now, kinda makes me wanna go and listen again.

Sometimes the book is read by a single person, which can be good or bad. I’ve tried to listen to a few and found them quite annoying, but some I find, very enjoyable. My first experience was with Flat-Out Love

. At first I wasn’t so sure I was going to like it, but after a little bit, I actually forgot it was only one person. That book was so sweet and funny, I actually startled a few people, in the grocery store, when I was listening to it.

Some books are read my numerous people. Red Hill, for example, was read by three different voices. Zachary Webber *sigh* was one of them. I actually had my hubby listen to this one, on our way to Chicago, in June. The story was so well written, that I was on the edge of my seat listening. My poor hubby kept getting shushed, even though I read the book before. I just wanted to listen to them, not him. The voices were so smooth I felt like I was in a trance.

So far I’ve only listened to books that I’ve already read. I think I enjoy the story more that way. For me, if I never knew the story, I think it would be hard to pay attention. I know I would miss things. My life isn’t always silent and I get distracted easily. So I think I’ll keep to previously read books. Up next, on my audible list, Ugly Love

If you’ve never tried audible, I encourage you to do so. They’re always running deals. In fact, if you’re a new subscriber, I think you get 2 free books. That’s great!! And even paying monthly, is sometimes half of what an audible costs. It’s so worth it. And if you do try, let me know which ones you get.

The Sea of Tranquility: A Novel

The Fault in Our Stars

The Original Adventures of Hank the Cowdog

One thought on “Listen to this!!!”