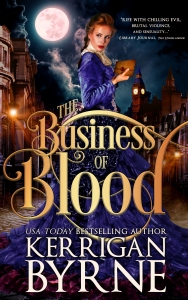 This story is just perfect for this time of year. A murder mystery surrounding Jack the Ripper is just what this season needs.

Fiona spends her days and night cleaning up after death. It’s not a luxurious job but someone has to do it. She uses this job as a way to keep an eye out for the return of Jack the Ripper. Ever since he murdered her friend, two years, she is waiting for his return so she can help in his capture. When murders start appearing similar, she wonders if it’s him or a copycat. Pretty soon she’s in the midst of a mystery that will cost her more than she ever imagined.

I loved Fiona. To be as strong as she is, after what she’s been through, is absolutely amazing. I don’t think I could do that. She is the only woman in a man’s world of death and intrigue, but she holds her own. The men around her all have secrets and the more she does her job, more of their secrets will come to light.

When a heart was broken as many times as mine, it shouldn’t work anymore. But somehow it still did. It kept going.

And so long as it beat in it’s chamber, I’d search for the Ripper.

When we first heard about this new book, it was said to not be a romance. I love romance. I need romance. But when Kerrigan Byrne writes a book, you read that book. Now I don’t know where this series is going to go, but I find myself believing that there may be a few hints of romance in the air, a connection if you will. So I’m gonna cross my fingers and hope Ms. Byrne grants my wish. Even a teeny one.