Happily Inc sounds like a pretty cute place to live – especially if you’re Pallas, the owner of a wedding planning company. Brides from all over go to Happy Inc to get married – and I bet some of them will want to stay. Even Nick the sculptor, son of a famous artist, walked into town, got a job, and felt the pull… or maybe it was the pull of Pallas and her love for her work.

I liked Nick’s touchy family dynamics, especially because Mallery referenced Fool’s Gold characters I was familiar with. Pallas had some strong family interactions as well – that tends to happen with an overbearing mother and a strong willed daughter.

In the end, everyone figured out what was best for themselves. For some, that meant some sacrifice. For others, it meant swallowing some pride. Either way, I got a view of real love in all its messy forms.

Buy YOU SAY IT FIRST

Calliope has already reviewed this novel a while back. I waited several months to include mine…one because I wanted her review to stand out as she is the true “HEA” reader between the two of us, whilst I am merely an imposter that pretends to from time to time (reel your neck in…I don’t pretend to love anything…hahahahahaha, so this review is a true reflection of how I felt about the book). I also waited in the hopes of perhaps reminding you to pick up this book if you have forgotten to do so after all the new release excitement has dissipated (yes I really am that thoughtful…you’re welcome).

In this novel we have the continuation of Mallery’s Fool’s Gold series. If you’re familiar and love the series then this one won’t disappoint. This is the story of Sam and Dellina. They are forced to work together after a misunderstanding that has caused them to avoid one another for months. Once they are forced to confront each other it’s only a matter a of time before they are forced to confront their feelings for each other as well. Sam’s parents are a bit over the top, but perhaps there *really* are people out in the world like them….I just haven’t been fortunate (or…errrr…unfortunate) enough to have met them.

There are plenty of hints throughout the novel of more names and romances to come as this series continues….Before long Fool’s Gold will be a booming metropolis!

Until next time,
Urania xx

ARC provided by NetGalley for an honest review

Buy it now Before We Kiss by Susan Mallery

Shelby and Aidan have self-improvement goals, and they’ve decided to form a mutually beneficial friendship with each other to put themselves on a successful path. They don’t anticipate the whole of Fool’s Gold egging on a ROMANTIC relationship between the two. And they certainly don’t foresee Mayor Marsha putting in her two cents.

I love all the Fool’s Gold heroes – who wouldn’t? They’re perfectly perfect for their ladies, and they’re swoon-worthy to boot. Mallery did something special with Aidan, though. Shelby got to know him as a friend, totally platonically, before ever diving into something more. Whether something romantic worked out for Aidan and Shelby or not, you’ll have to find out by reading the book. Shelby’s a great catch, so there’s definitely some sort of love story — just wait!

Buy BEST OF MY LOVE

This is another fantastic installation in Susan Mallery’s Fool’s Gold series.

Madeleine Krug climbs outside her comfort zone to plan a wedding for the sister of famed Jonny Blaze. Jonny is happy to meet her – and spend time with someone who doesn’t glom onto him for his star status.

As they work together, their relationship changes and deepens. Madeleine and Jonny together develop from platonic to romantic … in a nice, gradual, believable way.

Besides the love story, Mallery shows us the overwhelming Christmas spirit Fool’s Gold offers. I celebrated right along with the sidewalk strollers and cocoa sippers, listening to carols and looking at the sparkling lights.

From the sense of community and close friendships to the welcoming embrace given to newcomers, the people of Fool’s Gold are the perfect backdrop for Madeleine and Jonny to grow as individuals and a couple. And as usual, Mayor Marsha is the one to make things happen – for the good of the town, and for the good of romance!

Buy MARRY ME AT CHRISTMAS

Susan Mallery is a genius! She wrote Thrill Me as part of her long-running Fool’s Gold series, but it’s also part of a mini-series trio.  I love that! If you’re new to Fool’s Gold, or you don’t keep up with series, you can read the Hold Me, Kiss Me, Thrill Me trio and be totally satisfied. (You can read any of the Fool’s Gold books as standalones, but they’re much more fun together.)

In Thrill Me, Maya and Del separately return to their hometown to work on a project for Mayor Marsha. Maya works in video editing, and Del is a charmer on camera. Their work chemistry is easy and natural, and even though they had decade-old romantic history together, Del and Maya renew their relationship in the form of friendship.

Mallery impresses me by coming up with new and exciting professions for her characters. I LOVE the video production descriptions in this book.  Plus, it’s a good backdrop for Del and Maya getting close in the editing room.  😉

Maya and Del are loveable and fun characters, perfect for each other, and perfect for Fool’s Gold. Their romance was mostly in their own minds until they finally admitted feelings for each other and decided on Happily Ever After.  Another Susan Mallery winner!
-calliope 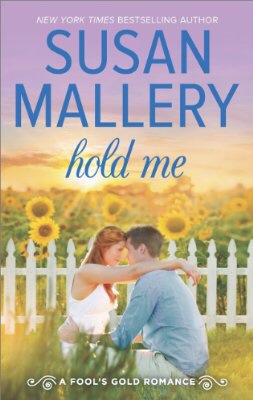 Talk about character development! You’ve got Kipling Gilmore as a secondary character in previous Fool’s Gold books, and though he was always okay, I never felt the need to know him better. In Hold Me, Mallery highlights Kipling’s intuitiveness, protectiveness and good will toward his community.

Destiny Mills’ character drives forward the plot as she changes from living a superficial life with defensive walls up, to a woman who embraces and rejoices in the challenges and blessings that befall her. Destiny gets in touch with her inner musician, and subsequently thrives. 🙂

I loved Destiny’s relationship with her sister and the other women of Fool’s Gold. But I also had a lot of fun reading the male bonding scenes. Mallery put an authentic voice to husbands and brothers who want to appear macho while staying out of the proverbial doghouse.

Well done, as always, and I can’t wait for the next book. 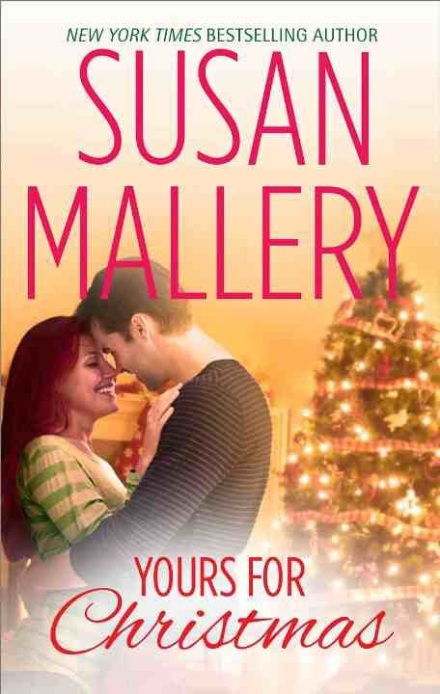 Fun and emotional romance set in Fool’s Gold! It’s finally Kenny’s turn to fall in love, though he fights it every step of the way. Good thing Bailey is persistent. 🙂

This generously long novella tugged at my heart strings as I watched not only a man and woman fall in love, but a child feel some extra Christmas love as well. From tree-trimming to Christmas galas, this book burst with all the verve of Mallery’s full-length novels. And I love Fool’s Gold, whether I get it in big doses or small. ❤
-calliope

buy YOURS FOR CHRISTMAS for just $1.99

I know Halloween hasn’t yet arrived, but there’s something about the cold New England weather that makes me think of Christmas … Here’s a festive re-release. Enjoy!

You know what happens four days from today? Christmas on 4th Street is released, and all you Susan Mallery fans (and Christmas romance fans) become happy campers!

You know what will make you even happier? Diving in to Noelle and Gabriel’s story. (Nice Christmassy character names, Ms. Mallery.)

Noelle’s three best friends are planning a triple wedding during the Fool’s Gold Christmas festival. One best friend’s fiancé has a cute doctor brother that comes to town for the wedding. I’m sure you can see where this is going… Kissing, dinners, getting caught in a remote cabin during a snowstorm … the usual.

A few things struck me as unique in this romantic tale. First, Noelle was the most optimistic person I’ve ever met in a book. I wasn’t annoyed, I was reflective. If Noelle could traverse tragedy and come out of it smiling, I should be able to do the… 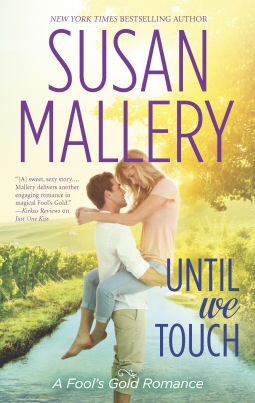 I fell in love with Fool’s Gold a while back, and the Score crew was a big reason why. Until We Touch focuses big time on Score – especially on cutie Larissa. She will do anything for an animal or a person in need… And Score partner Jack McGarry will always come running to help.

I’m not a huge animal person, but Larissa is, and her compulsion to rescue animals totally worked. If you love fur babies, you’ll sympathize and have some tender I-heart-animal moments. And if you don’t, you’ll just appreciate Larissa’s generous heart — like I did. In this book, Larissa helps plenty of animals, but she also makes a big difference in the life of a young adult… And reels in Jack for assistance.

So. The love story. It’s a slow build-up, then some good fireworks, then some bad fireworks. The awesome thing about loving someone is that it’s about the actions, not the feelings. Larissa and Jack already act like they love each other! It’s only when the words and feelings are brought to the surface that trouble arises.

I liked that Larissa was a little naive here. It fits her personality and brought me back to “stupid things I did while in my 20s” – hah! And I liked that Jack was wonderful except for the time he was a completely big jerk and I could’ve just pushed him with two open palms and said WHAT’S WRONG WITH YOU?!

The best part about a perfect hero who makes a gigantic stupid mistake is watching him make up for it. The apologies were worth the anguish, they really were.

As for the updates on other characters: Taryn’s wedding planning was enjoyable, and I liked the fun closure to Sam’s love life. Mayor Marsha brought upheaval and some new guests to town… and the local businesses were thriving. Read it. You’ll see – and love it – for yourself.

By the way, I read Until We Touch on the beach. My daughter looked at me from the edge of the ocean, rolled her eyes, and said, “There’s mom, crying again over a book.”

Yup. You betchya. Tears of sadness, tears of joy. That’s a successful read.

buy UNTIL WE TOUCH

The latest Fool’s Gold romance has girl next door Dellina trying not to fall in love with strong, silent, private Sam. Their romance starts off slow, heats up, cools down, and ends with a public announcement no one expects. I loved it!

I also liked this book for the camaraderie of Taryn and the football guys she works with, and the consistent support the women provide to each other. There’s something to be said for knowing there’s always someone to rely on, just a block or two away.

Before We Kiss has a lot of, um, instructions for intimacy. Graphic ones. Ones that will make you uncomfortable, and not always in a bad way. 😉 Sometimes Sam’s mother tells someone something no one wants to hear, and other times her candid sex conversations are quite educational. Be prepared!

If you’re an animal lover, this is the Susan Mallery book for you. A major subplot involves Larissa and her compulsion to help animals. By the end of the book, at least two main characters become grateful pet owners. Meow. Woof. 🙂

This was yummy icing on the cake of a week’s worth of reading Susan Mallery. In a few months I’ll be reviewing more, as I have a permanent place in my heart for Fool’s Gold, its caring women, and its smokin’ hot…. I mean LOVING… men.

Buy BEFORE WE KISS