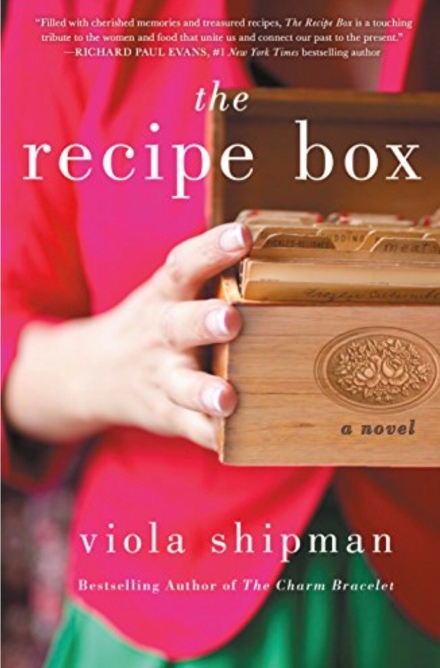 This is a charming story about Samantha moving back home to small town Michigan from her temporary pastry chef stint in NYC. Though her big city boss was a total jerk, Samantha did leave behind good friends and big dreams.

She didn’t realize that her dreams could be fulfilled in Michigan if she’d only give it a chance. Back at her family’s orchard, Samantha spent time with her mom and grandmother, finding out little by little just how special the family recipe box was. I loved how her two worlds collided via the recipe box, giving Samantha the opportunity of a lifetime – if she decided to take it.

I loved the orchard setting, the convivial relationships among the women, persistent Angelo, and that awesome recipe box. I couldn’t quite identify with Samantha’s personal struggles, and the story was fairly predictable, but in the end I was satisfied — much like I am when hearing the expected crunch of an apple. All good stuff. 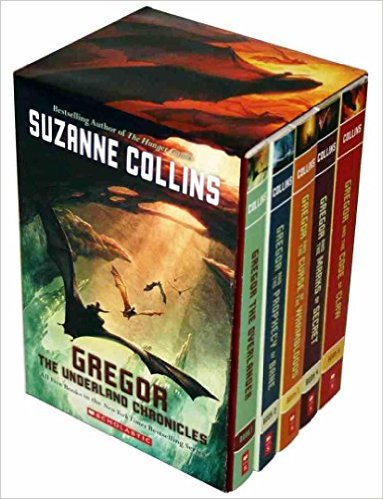 As a teacher, I’m often asked for kids’ book recommendations.  And I’m always looking for great books to offer to kids.  One series that always gets top mention is the Gregor Chronicles.

Written by Suzanne Collins of The Hunger Games fame, this is a milder, gentler series for younger readers not quite ready for that world.  With Gregor as our hero, we are taken to a world hidden deep beneath the streets of New York City.  His adventures bring him into contact with giant rats, bats, and roaches among others.  There are legends to be followed, and destinies to be realized.

It’s not without violence, however, as there are deaths along the way.  However, I was able to read and recommend this series to second graders with no hesitation. And older readers have no fear. This is still one of my favorites to read MYSELF.

The boxed set makes an excellent gift and truly should only be bought that way as eager eyes are sure to zip through the first volume and immediately look for the next.  Happy reading!

For people over a certain age, it’s hard to remember a time when September 11 wasn’t part of our shared history. We’ll never forget where we were that fateful Tuesday morning fifteen years ago. But for younger people, it’s been relegated to an event found in history books. That’s why books like this one are so important.

When that first plane hit, Kyle was sitting in class just like any normal teenager. It soon become clear, however, that this was more than just an accident. Released from school, making his way home across the Brooklyn Bridge, he comes across something. At first glance, a bird. But upon closer inspection, a girl covered in ash and wearing a pair of feathery wings. And was she trying to jump off the bridge? Nevertheless, he saves her from herself, from the crowd of people walking across the bridge, from the chaos that ensued in those first days.

When he gets home, he realizes that she has no idea who she is and no memory of what happened. So this becomes his focus while at the same time trying to manage in such a time of tragedy. His mom and sister are stuck on the west coast. He doesn’t know where his police officer dad is or if he’s even still alive. And his Uncle Matt needs constant care after a tragic accident months ago. All this falls on Kyle’s young shoulders.

This is such a beautifully written story. Kyle’s story is our main one, with the girl’s voice told in poetic bits and pieces interspersed throughout. There’s a lot going on-fear of the unknown, a confusing teen romance, family dynamics, and just pure resilience. An excellent pick for both young and old!

Buy It Now:  The Memory of Things

I love stories told in alternate writing styles. When you read as much and for as many years as I have, you gotta mix things up from time to time! Sometimes it doesn’t work, sometimes it does. In this case, it’s a bit of the first but much of the latter.

Rhea’s had a rough life by anyone’s standards. Her mom dies before she can hardly remember her, a tragic accident causes the loss of her arm, her dad drinks too much, she’s struggling with her sexual identity…the list goes on and on. When her dad dies and she’s sent to live with an aunt she hardly knows, it’s just too much. So she runs away, fleeing to New York City? Why New York? Because that’s where she feels closest to her mother, where she can immerse herself in her mom’s past as she tries to come to grips with her loss.

This is how the story is told. Each chapter is a letter in itself. It works for the most part. The story is easy to follow, and the narrative of Rhea’s letters are plausible and heart-tugging at the same time. The only fault I can find is that, towards the end, they seem to be a bit long-winded and drawn out more than is necessary. But still, a great story!

Buy It Now: How Many Letters Are In Goodbye?

In the spirit of the holidays, one of my absolute favorite books to share with young children is the delightful story of Auntie Claus.  Yes, it’s exactly what it sounds like.  But the youngest readers won’t get it right away, keeping the magic going until almost the very end.

Little Sophie has always adored her glamorous but eccentric aunt. There’s just something not quite right about the woman known as Auntie Claus.  Most intriguing to young Sophie is her aunt’s annual “business trip” right around Christmas every year.  When Sophie’s curiosity gets the best of her, she finds herself in for the trip of her life.  Along the way, though, she discovers more than she bargained for.  Most importantly, she finds out what the true meaning of Christmas is.

Kids will enjoy the magic of the story, and the trip to the North Pole is nothing short of amazing.  Older readers will love the puns and references to Christmas sprinkled throughout the story.   Add this one to your shopping list!

This book is EXACTLY WHY I put so much stock in endings. For example, I loved Outlander but hated the ending. In fact, the ending RUINED the whole book for me.

Christmas Wishes and Mistletoe Kisses, however, had such a lovely ending that it redeemed a book I almost gave 2 stars. That’s me being honest, not mean!

Christmas Wishes started out slow, but I’m a sucker for a merry Christmas story, so I marched on. The middle was more interesting, but also contrived. I mean, how many “accidental” ways are we going to get Nick and Abbey in the same room?

And then came the last third of the book. The third where I was so invested I could feel the scarf on Abbey’s neck, I could hear Nick’s mom’s crazy voice, I could see the excitement in Max’s eyes. I cried, people. Cried!!!

So, ultimately, I’m glad I read Christmas Wishes. Hale wrote a wonderful hero in Nick, and gave him realistic charm. Abbey being a nurse / designer was a fresh take on the young-woman-figuring-out-life trope. Most importantly for me: a happily ever after in the best way possible.

I know it’s still October, but the cold New England weather has me thinking of snowflakes and hot cocoa. And Christmas stories!

One Wish started out slow, which annoyed me. However, the author redeemed herself with lovable characters, a gala to die for, and a romance that ended the happily-est ever after, EVER!

My favorite part of the book was watching Hayley plan the gala. She was in her element, she encouraged her daughter to help, and she showed such graciousness working with Cynthia.

Mandy Baggot successfully wrote in characters that aren’t in most romances – and she gave them substantial roles: a brother, a daughter, a CEO who ISN’T a jerk, and the CEO’s mom who is just lovely.

The story includes a heartwarming message about love and loss, and ways to move forward without leaving the memories behind.

Uplifting for sure, and just Christmassy enough. 🙂

I’ve gathered a few authors over the last few years or so that are complete auto buys for me ut as I get burned by each author I slowly have been dropping the auto buys. Just not worth the pain my bank account feels every time one of my much awaited books lets me down once again. But my romantic heart was sure that Nalini Singh would not let me down. For once I was not wrong!!

Singh writes the Psy-Changeling books of which there are 12 so far and all beloved by me. But my favorite of hers is the Guild Hunter series. The world in this series is dark and gritty and a hard one to live in, all of the characters have an intense back story that one glimpse makes you want to know everything about their past. Book #6 Archangel’s Legion is an excellent addition to the stories in the series that have come before this one.

Elena returns as the heroine and the reason I love these books so much. She is a fierce warrior and although she’s lost a lot in her young young life, she is the Archangel’s Consort and is definitely up for the task. There is upheaval in the angelic world as the Archangel’s are evolving and getting additional powers that are unexpected to all. When angels drop from the sky without warning and the vampires in Raphael’s territory begin to get ill from tainted blood, answers need to be found.

This was a fantastic addition to the growing series. The world remains just as cold, dark and gritty as always, which is what I wanted to see. With each book that comes out and as one more person in this world gets their HEA there is always the fear that the edge of that hero or heroine will be gone. That has not been the case with these characters at all. While Dmitri has gotten his HEA, he certainly doesn’t seem to be any less blood thirsty or will to defend the Archangel.

The most surprising and unexpected part of this book was the humor. It’s definitely not something I would ever associate with Raphael or even this world. Elena has a dark sense of humor we often get to see come out when she is with her best friend Sara or with her other Hunters like Ransom but in this book we see the Archangel himself and the other angels be funny for once.

“Wave to the nice tourists, Sparkle. I promise it won’t cause pestilence and firestorms.”
Elena bit the inside of her cheek at Aodhan’s glare-she’d never seen anyone crack his reserved shell. “Sparkle and Bluebell, nice.”
“Never,” Aodhan said, hands stubbornly on the girder, “ever repeat that. Illium seems to have forgotten I promised to separate his tongue from his mouth should he utter it again in this immortal lifetime.”

Raphael gets into the bantering with Elena, which caused me to giggle more than a few times. But the one thing the series does well and always has done well is action. This is action packed and the last quarter of the book had me unable to put the book down and had me telling my husband to SHUSH while I finished. I highly recommend this series and this is a great addition to it. Then again, I highly recommend anything Nalini Singh writes ever. She is quickly becoming that author that never lets me down. Ever.