Blessed are those who believe in all that two hearts aligned achieve. For once united, no matter where winter finds them, they will always be warm.

After the emotional distress of The Shadows, I was ready, and yet not, for this story. I saw it coming for a few books now but I was not fully prepared for what this book was gonna bring. When I finished chapter one with tears in my eyes I just KNEW that this was gonna be a doozy. And I couldn’t wait. So I grabbed a box of tissues, got comfortable and dove right in.

Everyone seemed to get their HEA but not Trez. He’s been floating in and out for a while now. The pain so great. He avoids everyone because his pain seems to bring them all down to his level and he doesn’t wanna do that. When he first met Therese and she was the spitting image of his Chosen, he couldn’t get her out of his mind. It was an instant shock to his system. Come to find out, it was the same with as well.

Therese is trying to make a life for herself and doesn’t need any handouts or distractions. But there’s just something about Trez that she can’t put her finger on. There’s more to the Shadow than she thinks. But while she tries to distance herself, the fates have another thing in mind.

I needed this book. Diehard fans need this. I am so happy that J.R. Ward gave us what we wanted. There were so many scenes that tugged at my heart and had me reaching for those tissues. Family is the theme all throughout this book. An unbreakable familial bond, weaved together with love. My heart is truly happy. If you believe in happily ever afters, then you definitely need to pick up a copy of Where Winter Finds You.

Now THAT’S the way I wanted this book to go. Old friends. New adversaries. Same family feel. I love this world. Don’t mind my scatterbrained quick review. The Black Dagger Brotherhood makes me all a flutter.

In every BDB book there’s more than one storyline happening. And sometimes I don’t care and then find myself skimming through quickly. But in this book, that was not the case. I was fully invested in each story and read at a normal pace, for my speed reader self, and loved every word.

This book had all the spice but without all the emotion. Now, don’t get me wrong, there were lots of feels, but nothing overwhelming that made you wanna fall to the ground in despair.

The Thief brought back a few characters that I think will be fabulous additions to the BDB world. Plus we got a glimpse into who the next book will be about and I can’t wait for that explosive book.

I love this series so much. It’s one I reread each year. Yes, since this world is so huge, and I have the memory of a gnat, I must do that. But it’s definitely no heartache to spend time in this super sexy world. 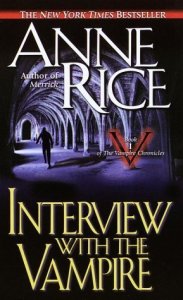 First, I can’t believe this book was written almost 40 years ago!

Second, I can’t believe I haven’t bothered to read it up until now.

Third, it is worth all the hype.

Finally, a message to my dear Louis –

Louis, Louis, Louis…you are not a tortured soul…you’re just a big fat whiner…..get over yourself man…..

Until next time…
Urania xx

Buy it now Interview with a Vampire by Anne Rice

New Orleans is a city of excess. Music, food, drink…it’s all there to be had in abundance. Stories of the supernatural and paranormal are no exception. Ghosts, witches, voodoo queens, vampires…you name it and they’ve got it. One of the best known and most frequently retold legends centers around the Casquette girls of the Ursuline Convent. Walk by on a dark & foggy night and you can almost see the shutters rattling.

This take on the infamous tale picks up after the Storm of the Century. Katrina isn’t specifically mentioned but the implication is there. Adele is eager to return to the city she loves. She and her father are among the first to come home, the magical pull of the city being too strong for them to resist. It’s a city in ruins. Electricity is scarce, groceries are hard to come by, and there’s a city-wide curfew in effect. Still, it’s good to be back. Adele finds comfort in the little things such as walking the streets of the French Quarter in the mornings and evenings. It’s on one such walk that she happens to walk past the Ursuline Convent. She’s lived in New Orleans her entire life, and she knows the stories. When the infamous blood suckers are accidentally released, Adele and her friends must find a way to stop them from taking over what’s left of the city.

Did I love this story so much more because of my love for New Orleans? No doubt. The author writes with such depth and accuracy that I felt as if I was walking the streets of the French Quarter, waiting for one of the vampires to jump out and grab me. But I also know that I would have loved this story almost as much without that sense of familiarity. The vampires are dark and scary with just enough charm thrown in to almost make them likeable. Intertwined with their tale are stories of voodoo and witchcraft. To top it off, the human characters are fun and likeable. And Adele makes one heck of a leading character.

Grab this one, turn the lights down low, and get ready to be scared!

Buy It Now: The Casquette Girls

This is a fast paced read that will keep you at the edge of your seat and your heart racing in your chest.

From the very first chapter, this book grabbed me. This is exactly what I was hoping for! It was pretty much non stop action and intrigue and I was sucked in and never wanted it to end. I mean seriously, who wouldn’t get sucked in with a vampire book? (pun intended)

Genesis was wanted by two men, but she can only be with one. After being raised to believe one thing and finding it it was all false, she has no idea what she’s supposed to do and how she’s supposed to handle this new life that was chosen for her. She must find the strength to stay strong and put her faith in the beings that she has feared all her life.

Ethan struggles with wanting Genesis. But knowing that he’s loved and lost before, and he’s not sure if his heart is strong enough to try this again. He’s not sure if he can live through that again.

The romance aspect, of this book, is definitely what I come to expect from Rachel. Beautiful and sweet, with a nice helping of sexy. Plus the emotional side did tug at my heartstrings a bit too.

Rachel Van Dyken has mastered the paranormal romance. As if there was ever any doubt. I am very much looking forward to the next installment!

This was a fun book to read. I love the way that Seth Grahame-Smith writes and have enjoyed several of his books.

Although it’s described as the sequel to Abraham Lincoln, Vampire Hunter, it actually serves as a prequel as well. We get a good look at Henry Sturges in his pre-vampire era and find out how he came to be. There’s an excellent description of what happened after the conclusion of the previous story that was very satisfying to me as a reader. And, we find out that many of the major events, tragic ones especially, in our world’s history had the influence of vampires woven all within their thread.

A minor note on a personal level-this one was a bit harder for me to fall into and then to follow along with because it does bounce around a bit more than the earlier book. Still, the historical events are so accurately written about with Henry easily part of the story that it’s a book I would definitely recommend!

I’ve gathered a few authors over the last few years or so that are complete auto buys for me ut as I get burned by each author I slowly have been dropping the auto buys. Just not worth the pain my bank account feels every time one of my much awaited books lets me down once again. But my romantic heart was sure that Nalini Singh would not let me down. For once I was not wrong!!

Singh writes the Psy-Changeling books of which there are 12 so far and all beloved by me. But my favorite of hers is the Guild Hunter series. The world in this series is dark and gritty and a hard one to live in, all of the characters have an intense back story that one glimpse makes you want to know everything about their past. Book #6 Archangel’s Legion is an excellent addition to the stories in the series that have come before this one.

Elena returns as the heroine and the reason I love these books so much. She is a fierce warrior and although she’s lost a lot in her young young life, she is the Archangel’s Consort and is definitely up for the task. There is upheaval in the angelic world as the Archangel’s are evolving and getting additional powers that are unexpected to all. When angels drop from the sky without warning and the vampires in Raphael’s territory begin to get ill from tainted blood, answers need to be found.

This was a fantastic addition to the growing series. The world remains just as cold, dark and gritty as always, which is what I wanted to see. With each book that comes out and as one more person in this world gets their HEA there is always the fear that the edge of that hero or heroine will be gone. That has not been the case with these characters at all. While Dmitri has gotten his HEA, he certainly doesn’t seem to be any less blood thirsty or will to defend the Archangel.

The most surprising and unexpected part of this book was the humor. It’s definitely not something I would ever associate with Raphael or even this world. Elena has a dark sense of humor we often get to see come out when she is with her best friend Sara or with her other Hunters like Ransom but in this book we see the Archangel himself and the other angels be funny for once.

“Wave to the nice tourists, Sparkle. I promise it won’t cause pestilence and firestorms.”
Elena bit the inside of her cheek at Aodhan’s glare-she’d never seen anyone crack his reserved shell. “Sparkle and Bluebell, nice.”
“Never,” Aodhan said, hands stubbornly on the girder, “ever repeat that. Illium seems to have forgotten I promised to separate his tongue from his mouth should he utter it again in this immortal lifetime.”

Raphael gets into the bantering with Elena, which caused me to giggle more than a few times. But the one thing the series does well and always has done well is action. This is action packed and the last quarter of the book had me unable to put the book down and had me telling my husband to SHUSH while I finished. I highly recommend this series and this is a great addition to it. Then again, I highly recommend anything Nalini Singh writes ever. She is quickly becoming that author that never lets me down. Ever.